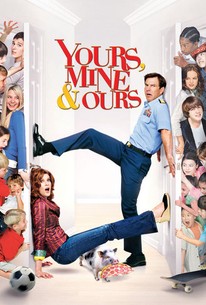 Critics Consensus: The initial set-up is unbelievable, the plotting is predictable and stale, and the comedy depends on repetitive pratfalls that soon get old.

Critics Consensus: The initial set-up is unbelievable, the plotting is predictable and stale, and the comedy depends on repetitive pratfalls that soon get old.

Critic Consensus: The initial set-up is unbelievable, the plotting is predictable and stale, and the comedy depends on repetitive pratfalls that soon get old.

Yours, Mine & Ours Videos

Yours, Mine & Ours Photos

When Frank Beardsley, a widower with eight children, runs into his high school sweetheart, Helen North, it's as if 30 years never passed! Helen, also a widow with 10 kids of her own that include the six she and her husband adopted, feels the attraction as well. It's no wonder they rush into marriage without telling their kids. True love can conquer all -- right? Unfortunately for Frank and Helen, the families don't mesh quite as easily as the newlyweds had hoped. They probably should have seen the culture clash coming: the disciplined Beardsleys run things by the book; for the energetic and vivacious Norths, there is no book. Helen's kids aren't pleased about moving and sharing rooms with a bunch of uptight strangers. Frank's children have nothing in common with the unruly Norths. Since both sets of kids aren't happy, they devise a plan to undermine the marriage and team up to plot the breakup. East meets west as the two families find a way to work together -- in order to separate! Just when it appears that the kids have succeeded, they realize they like each other despite their differences -- they don't want their families to split up! Can they save Frank and Helen's marriage after they so brilliantly split them up? It's up to Frank and Helen.

News & Interviews for Yours, Mine & Ours

View All Yours, Mine & Ours News

Critic Reviews for Yours, Mine & Ours

Dennis Quaid and Rene Russo follow wearily in the footsteps of Henry Fonda and Lucille Ball in this asinine remake.

Another pointless remake with a cast who should know better.

Raja Gosnell's direction follows the first rule of slapstick: If actor stuck with nothing to do, have them fall in vat of goo.

Not a fresh insight or genuine laugh in sight. Nothing here, in fact, for you, him, her, yours, mine, theirs or anybody's.

Regardless of a distinct lack of romantic chemistry between Dennis Quaid and Rene Russo, the able-bodied actors fulfill the slapstick demands of this run-of-the-mill family comedy based on the 1968 movie with Henry Fonda and Lucille Ball.

Looking to follow the Cheaper By The Dozen formula to box office success, Yours, Mine & Ours is a tiresome kids comedy that's mostly loud and mean-spirited.

The secret to the film's modest success can be summed up in five words: Dennis Quaid and Rene Russo.

I'd have a fit if I was ever again to hear Russo shout, 'Group hug!'

The film is directed in typically dull, overblown, idiotic fashion by Raja Gosnell, the man responsible for Big Momma's House and both of the Scooby-Doo movies.

Eighteen adorable reasons to open our wrists and tie our tubes.

Audience Reviews for Yours, Mine & Ours

A really fun family movie. It's like Cheaper By The Dozen but you multiply the number of kids. :) Just a really great movie for the whole family :) Dennis Quid and Rene Russo are great as well as all of the kids :) I love Mrs. Munion too lol "It has a certain smell like paprika with a hint of wet dog." lol :) :) :) :)

A huge ripoff of Cheaper by the Dozen, a terrible film and so cliche and stupid.

Yours, Mine & Ours Quotes