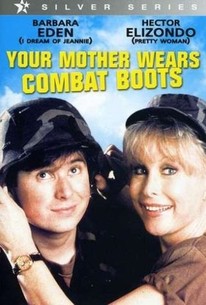 When an overprotective mother discovers that her son has joined the United States Air Force against her wishes, she soon ends up training right alongside him in this lighthearted tale of motherly love starring Hector Elizondo I Dream of Jeannie's Barbara Eden. When mother shoes up in training camp to run the gamut with her patriotic son, the aspiring military man is embarrassed to no end. Thankfully for both mother and son, the pair is able to come to a tentative understanding that allows both to pursue their own dreams on their own terms.

Kate Benton
as Susan
View All

There are no critic reviews yet for Your Mother Wears Combat Boots. Keep checking Rotten Tomatoes for updates!