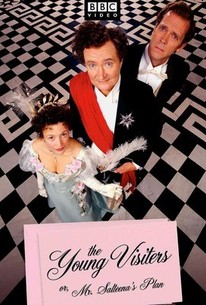 This made-for-TV British comedy begins at the turn of the century, as bumbling ironmonger Alfred Salteena (Jim Broadbent) meets a pretty girl named Ethel Monticue (Lyndsey Marshal) on a train and invites her to his London flat. Hoping to impress the girl, Alfred brags about all the "important" people he knows; swallowing the line whole, the covetous Ethel insists upon meeting Alfred's illustrious acquaintance. Enter Lord Bernard Clark (Hugh Laurie), a seedy nobleman who offers to train Alfred to be a social lion so that he'll be more acceptable to Ethel; what Lord Bernard doesn't tell Alfred is that he intends to keep Ethel for himself. Much of the humor arises from Alfred's experiences at a high-society "boot camp" run by an indigent aristocrat, the Earl of Clincham (Bill Nighy). The Young Visiters was written in 1890 by Daisy Ashford -- who was all of nine years old at the time! The book remained on the shelf until it was published, misspellings and all, in 1919, with a preface by James M. Barrie (whom many reviewers suspected of being the novel's true author). First telecast in the U.K. on December 26, 2003, the film won a BAFTA award for best original music. The Young Visiters premiered in the United States courtesy of the BBC America digital-cable service on November 2, 2004. ~ Hal Erickson, Rovi

Bill Nighy
as Earl of Clincham

Alan Bennett
as Narrator
View All

Critic Reviews for The Young Visiters

Audience Reviews for The Young Visiters

There are no featured audience reviews yet. Click the link below to see what others say about The Young Visiters!