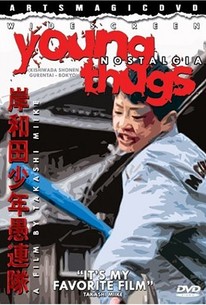 Nostalgia deals with the home and school life of a young boy whose world is a mesh of the lovably comic and the brutally violent. Focusing on the emergence of an adult perception in a boy who until now has lived largely in fantasy, the film is a coming-of-age tale that director Takashi Miike professes to be his favorite among his works. ~ Cammila Collar, Rovi

There are no critic reviews yet for Kishiwada Shônen Gurentai: Bôkyô (Young Thugs: Nostalgia). Keep checking Rotten Tomatoes for updates!

There are no featured audience reviews yet. Click the link below to see what others say about Kishiwada Shônen Gurentai: Bôkyô (Young Thugs: Nostalgia)!