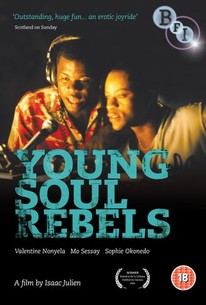 This largely character-driven thriller-drama is the feature-film debut of British documentary filmmaker Isaac Julien, and provides viewers with an insider's look at the diverse lifestyles of hip, young black immigrants who lived upon the fringes of 1977 London society. The film begins in a colorful park setting where, in the late-night hours, gay men cruise. A stabbing occurs and unbeknownst to the killer, a passerby has recorded it on cassette. The story then jumps to two young aspiring DJs, the heterosexual and flamboyant Chris and his best friend, the gay and rather reserved Caz, as they defiantly broadcast soul music from their ragtag, rolling pirate radio station. With their "Soul Patrol," the two symbolically thumb their noses at the conservative BBC that dominates the airwaves. The murder victim is a friend of Caz, and he becomes a prime suspect in the case. Unbeknownst to him, someone has dropped by the cassette tape with the evidence that will save him. At the same time, his friendship with Chris becomes strained when it becomes obvious that both young men are on the cusp of heading in dramatically different life directions. Caz has been getting increasingly involved with the politics and wildness of the fledgling punk-rock movement, while normally wild Chris has been offered a lucrative contract to work as a DJ at a major, mainstream radio station by his new girlfriend Tracy, a production assistant there. Still, the two try to somehow prepare to co-host a concert protesting the upcoming Queen's Silver Jubilee celebration.

There are no critic reviews yet for Young Soul Rebels. Keep checking Rotten Tomatoes for updates!

There are no featured audience reviews yet. Click the link below to see what others say about Young Soul Rebels!