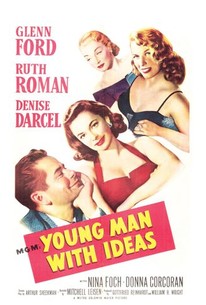 The Young Man with Ideas in this MGM production is idealistic lawyer Maxwell Webster (Glenn Ford). Too self-effacing for his own good, Webster vegetates in Montana with his wife Julie (Ruth Roman) and children for nearly 10 years before starting life anew in California. Living penuriously while studying for his California bar exam, Webster tries out several moneymaking schemes, most of which come acropper. Along the way, he inadvertently gets involved with a bookie ring, culminating in a climactic courtroom scene wherein Webster defends himself -- and surprise, he doesn't have a fool for a client. In typical Hollywood fashion, the script requires the talented Ruth Roman to express jealousy when a brace of lovely females played by Nina Foch and Denise Darcel briefly set their caps for the ingenuous Glenn Ford. ~ Hal Erickson, Rovi

Will Wright
as Party Guest
View All

There are no critic reviews yet for Young Man with Ideas. Keep checking Rotten Tomatoes for updates!

There are no featured reviews for Young Man with Ideas at this time.