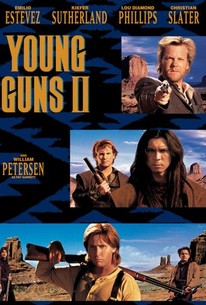 Only three of the original five "young guns" -- Billy the Kid (Emilio Estevez), Jose Chavez y Chavez (Lou Diamond Phillips), and Doc Scurlock (Kiefer Sutherland) -- return in Young Guns II, which is the story of Billy the Kid and his race to safety in Old Mexico while being trailed by a group of government agents led by Pat Garrett (William Petersen). Along the way, Billy's crew gains three new recruits: Arkansas Dave Rudabaugh (Christian Slater), Tom O'Folliard (Balthazar Getty), and Hendry French (Alan Ruck). Though the film suffers from an uneven script, many performances -- particularly Slater's -- are surprisingly strong, and the movie looks great. The theme song, "Blaze of Glory," is performed by Jon Bon Jovi in his first solo appearance; the rocker also has a cameo in the film.

Emilio Estevez
as Billy the Kid

The screenplay feels unfinished, the direction is ambling, but the performances are interesting.

Murphy directs cleanly, arranging the shoot-outs and Billy's personal declarations of doubt with a solid rhythm, making the film feel urged instead of assigned.

Can you resist a movie with a Jon Bon Jovi theme song? You can? But this was before he turned into a total wuss!

Lacks the grit and intensity of its predecessor.

Not as fresh or character-driven as the first film but still a hoot, "Young Guns II" is probably one of the better films of Estevez, Sutherland et al's career. Jon Bon Jovi also deserves a lot of credit for the movies appeal, creating an original set of s

Sequel to the cool Young Guns, Young Guns II is the story of how Billy The Kid is trying to outrun Pat Garrett and make it it safely to Old Mexico. As far as sequels so, usually they aren't that great, but Young Guns II is an interesting sequel with an awesome story that definitely delivers an entertaining 2 hours. The film follows the events after the first film, and many of the cast of the first film return where they left off. I am a fan of the old school Spaghetti westerns of Sergio Leone, but the Young Guns films are Westerns that are a lot of fun. This second film has a lot of action, a good soundtrack and good acting. Compared to the old school Westerns, Young Guns I and II can't compare, but it does deliver a dose of a classic Western film to a "hiper" audience. I think that Young Guns II is a fine sequel and really, I can't decide between which film I liked better. Each are very good and fun. The films are nothing epic, but the fact that it's a film about legendary outlaw Billy The Kid makes it worth watching. Emilio Estevez (who's career pretty much went no where) is a well suited actor to play Billy The Kid and he reprises his role here, and he delivers another great comical, eccentric performance. Young Guns II is a revamped Western film that gives the genre new blood. Along with Clint Eastwood's Unforgiven, Young Guns II can be considered a lifeline for a somewhat dying genre of cinema. Also in a way, i'd see both films in the Young Guns series as a bridge from the old spaghetti Westerns to the more recent Westerns Such as Unforgiven, The Quick And The Dead and the remake of True Grit. Without Young Guns I and II, I'm sure the genre would've died long ago.

Close to the first, not quite as good due to the fact they try and make it to silly here and there, silly wanna be funny moments that dont work. The soundtrack is better and the action looks better. The cast is still great but its just alittle too over the top. It all looks like the Bon Jovi music video, the ending is also abit stupid, but the final gunfight though short lived is pretty cool.

I dont know why a lot of people canned this flick... its not as good as the first, but it was entertaining and I liked it. Its more easy going, relaxed and funny. I guess its because of Billy the Kid's charisma, which is played well by Emilio Estevez, the Young Guns movies are some of his best work. Then with the rest of the star studded cast, some who are now household names past and present, it really did well. I guess the flaws in it is the idea of reinventing the modern western. But its not meant to be taken seriously, its a good yarn and entertaining flick, not a biography. But I guess when the rock guitar comes in during the scenes, people would either want to scream and curse, but I think it suits it perfectly... I mean, what better way to bring back a classic genre without an updated score which doesn't fit into the movie, but rather rides alongside with it... Alan Silvestri is a good composer, kudos to him. And the accompanying soundtrack by Jon Bon Jovi is also a blast. I guess what I felt down and out about was the ending... and some parts of the movie didn't fit too well in some places. But the performances are what counts, and for an ensemble cast, I think everyone delivered. If its one character that is underrated as far as folk heroes and bad guys go, its Emilio's Billy the Kid.