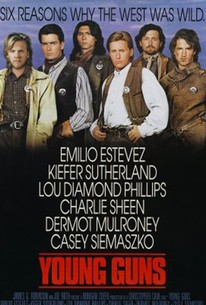 Critics Consensus: Young Guns rounds up a posse of attractive young leads, but this cheerfully shallow Brat Pack Western ultimately has too much hat and not enough cattle.

Critics Consensus: Young Guns rounds up a posse of attractive young leads, but this cheerfully shallow Brat Pack Western ultimately has too much hat and not enough cattle.

Critic Consensus: Young Guns rounds up a posse of attractive young leads, but this cheerfully shallow Brat Pack Western ultimately has too much hat and not enough cattle.

In this western, a group of young, hotheaded kids, including the infamous William H. Bonney (Emilio Estevez), are hired to help out British land-owner John Henry Tunstall (Terence Stamp). When their boss is killed, Bonney leads the group of gunslingers out to capture the murderers. Giving in to his rage, Bonney shoots the guilty men down instead of bringing them back to town, and he and his boys end up on the run from the law.

Emilio Estevez
as Billy the Kid

A grownup could die in this wasteland.

''Young Guns'' is a very Dean-ish, sensitive delinquent melodrama disguised, for no good reason, as a western.

Yet the story is told with too much affection for gunplay and the only thought worth preserving is that these mythic figures of the Old West often were very young men. Big deal.

Though it pales beside such antecedents as Arthur Penn's "The Left-Handed Gun" or Sam Peckinpah's "Pat Garrett and Billy the Kid," it has a slick, smoky vigor.

As Billy the Kid, Emilio Estevez is the nominal star here, but no one really shines.

Christopher Cain directed this western from a script by John Fusco, and on the whole seems much more comfortable with the scroungy and scatological dialogue than he does with the action sequences.

The polite word for his kind of filmmaking is "classical.'' Another word is "trite."

It's glossy, slick and stylish, but boasts very little in the way of substance or excitement.

It's a western that shows both box-office calculation and respect for American history.

There's some tough action sequences and a personable cast - including cameos from Tom Cruise and Brooke Shields - in a movie that (almost) kick-started a fading genre.

Young Guns is an unexpectedly entertaining film. It puts new twists into the familiar terrain of the western.

The boys shoot, ride, flirt, get high on peyote and revel in enough self-adoring, anachronistic behavior to have all but inveterate teenyboppers swearing vengeance on the film's makers.

Although the stars are nice to look at, the story, characters, and plot aren't all that interesting. It's the typical western, and I really don't care for westerns anyway. The action was probably the best part. Overall, it's okay, but I bet other people just watch it for the stars as well.

I'll admit that Young Guns isn't all that great of a movie, but sometimes it's just nice to hear six reasons why the west was wild. It's basically an 80s movie set in the west with a cast of teen idols playing outlaws. In many ways it feels like a brat pack movie rather than an actual western, but I think that was obviously the intent here. It's undoubtedly got it's fun moments here like the peyote scene and the overuse of blood and insensibility when it comes to death. Somehow, this does end up feeling like some kind of bizarre prequel to Pat Garret and Billy the Kid. I never picked up on that before, but there are definitely some similarities. You've got the excellent taste in slow motion killings, character development that defies tradition and seemingly an entrance into the mind of a western outlaw. Now how can you beat a cast like Emilio Estevez as Billy, Kiefer Sutherland as doc, Lou Diamond Phillips as Chavez and a pre-drug Charlie Sheen? I guess if you threw in Zod and Jack Palance it'd be perfect. Oh wait, they are in it. The story is really easy to get into and the characters all have their goofy qualities. I think the more times I see this, the more I seem to enjoy it and and accept it for what it is. The 80s saw very few westerns, but this is the quintessential 80s western by far.

By the Mid 70's, it seemed that the Western genre was suffering. The great epics that Sergio Leone had conjured up had come and gone, and it all seemed that the Western was obsolete. With Young Guns, director Christopher Cain gives a much needed transfusion to a somewhat dying genre of cinema. Face it, the best years of Westerns were in the 1960's. Since then, theres been quite a few Western films that have been good and entertaining, but it's still a lost art. With Young Guns, the genre gets an interesting new twist with the story of the legendary outlaw, Billy The Kid. The film has a great cast of actors and has terrific action. The film is a pleasant time waster. The thing thats great about Young Guns is that it's a terrific introduction to the Western genre. This was the first Western I watched, and quite enjoyed it, and still do. In fact after watching this film, I watched The Good, The and The Ugly and got a feel for what the genre was. Young Guns is great entertainment and has a good story with a good cast of some of this era's top young talented actors. The story is at times uneven, but really it was made to be pure entertainment, a film not to be taken too seriously. The fact that Jack Palance and Terrence Stamp are in the film is a great addition to a good Western, and it's very interesting to see the conflict between the two men on screen. Sure Young Guns has its faults, but this is still an amusing film to watch. Young Guns is a terrific addition to the Western genre, though not as memorable as the classics of the 60's, this film is still a good little film to watch by newcomers and aficionado alike.