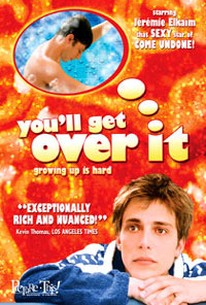 You'll Get Over It Photos

Fabrice Cazeneuve's coming-out comedy drama You'll Get Over It (Tu Verras, Ca Te Passeras) was originally aired on television in France. Teenage Vincent (Julien Baumgartner) is the golden boy of his high school and family. He's on the swim team, has an adoring girlfriend in Noemie (Julie Maraval), and a loyal best friend in Stephane (Francois Comar). However, he secretly sees an older Bruno (Nils Ohlund) for discreet sexual encounters. When the new kid at school, Benjamin (Jeremie Elkaim), tries to pick him up, everyone finds out his secret. His previously supportive network begins to falter, while his mean older brother Regis (Antoine Michel) eggs them on. You'll Get Over It was screened at the 2003 San Francisco Gay & Lesbian Film Festival.

Dimitri Rataud
as Man in Marais Bar
View All

Critic Reviews for You'll Get Over It

You can see the emotions of the characters pass through the actors' faces and bodies. Mr. Baumgartner shines brightest, perhaps because his character is the most conflicted.

There's a naturalness to the entire cast, yet there is considerable depth to the portrayals, and the interplay between the characters is exceptionally rich and nuanced.

There are countless teenagers living secret lives right now, and they don't need hurrahs. They need honesty -- and better films than this.

While Cazeneuve's story is about gay love, it also charts universal truths about adolescent romance and high school politics with great aplomb.

Even if [it] has a slightly mustry, afterschool special message to impart...the picture delivers it with sufficient charm and complexity to escape TV-movie mediocrity.

A sensitive coming-of-age story that, while not trailblazing in terms of originality, manages to be quietly affecting.

A well-done version of an old tale - they manage to make it interesting and Julien Baumgartner makes it feel like his personal story.

Genuinely engaging performances from Baumgartner and Maravalidealized are kind of wasted in this idealized and dramatically weightless coming(-out)-of-age story...

Audience Reviews for You'll Get Over It

A young man was accidentally outed and become the social pariah. A very progressive film which overshadowed its nice message of individuality.

You'll Get Over It Quotes