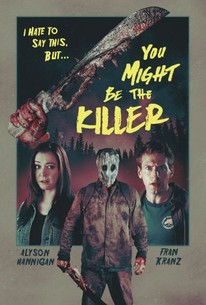 As Sam flees from a masked killer at camp, it slowly dawns on him that HE might be the killer. With the help of his film buff friend Chuck, Sam navigates through horror movie tropes to try and make it out of this plot alive.

Brett Simmons' You Might Be The Killer is not Cabin In The Woods 2.0, but that doesn't stop stay-up-late genre manipulation from scoring uptempo campfire thrills.

There were some cute moments, but overall, the film was far too broad, and I felt at one point it could better serve as an interactive stage play with its over the top physicality and splatter count.

Every scene we're reminded that Cabin in the Woods exists, and that we should go watch it. Perhaps instead.

... great tribute to 80s slashers with lots of inside jokes and some awesome bloody splatter - and honestly, watching Fran Kanz & Alyson Hannigan do ANYTHING is delightful.

Ultimately You Might Be The Killers overstays its welcome and sputters to a (foregone) conclusion that relies too much on unearned audience investment in secondary characters who are little more than types.

This feature doesn't have much up its sleeve other than low-budget gore, pointless structural zig-zagging, and trite, overwritten cleverness.

A blood-soaked American recreation of a summer camp slaughter - first to arrive adult counsellors only - that hits all the genre's marks even as it drily sends up the masked killer, his archetypal victims, and harried target.

Probably better than any movie adapted from a string of tweets ever should be.

You Might Be the Killer can't quite match the greatness of Cabin in the Woods or the heart of The Final Girls, but it's a solid if slight piece of slasher comedy that's made with love, for the people who love the genre.

Anyone who has seen a few horror films will most likely feel talked down to by some of the jokes in the film.

...a progressively repetitive midsection that highlights the decidedly one-note bent of the movie's storyline...