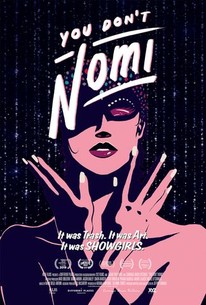 In YOU DON'T NOMI, a chorus of film critics and fervent devotees explore the complicated afterlife of 1995's biggest film flop, Paul Verhoeven's salacious Showgirls, from disastrous release to cult adoration and extraordinary redemption. The film features Adam Nayman (Vice Guide to Film), April Kidwell (I, Nomi) and Peaches Christ (Milk) as well as archive interview footage with the cast and crew of Showgirls.

Critic Reviews for You Don't Nomi

Scattershot, repetitive, and yet never boring.

All power to the director and his sources for seeing more than most of us do. But skeptics are unlikely to be converted by quotes that tend to be either generic or overstated.

Doesn't live up to its truly inspired title.

You Don't Nomi makes a compelling case that the much-maligned pop-culture landmark can be judged as either tawdry rubbish or subversive comic triumph.

You don't have to agree with the thesis, with every talking point burnishing "Showgirls'" status, to enjoy seeing these obsessives make their case.

Elizabeth Berkley is only in the film via archival footage - a true travesty if I say so myself.

McHale skillfully assembles a portrait of the film's shifting reception in popular culture both by its makers and the audiences - both for the unique space it occupies in cinema, and for what some seem eager to project upon it.

The movie is a powerful and unforgettable example of what film criticism really is and that it's not (just) for the filmmakers. It's for the audience, and that is who the film is aimed at. This one is for the fans.

Showgirls, we might never know you but You Don't Nomi does a very fine job at helping us understand your imperishable place in cinema.

You Don't Nomi morphs into a thoughtful dissection of a film in which no singular view is right or wrong...

[It] certainly paints a picture of a film that is a true auteur's vision, enlivened by an actress' devotion and worthy of its audience's adoration.

There are no featured reviews for You Don't Nomi at this time.