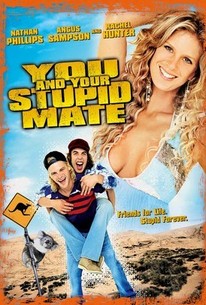 When two Australian slackers learn that their favorite television soap star is about to get the axe, they set out on a determined mission to save her career and keep the show from being cancelled by any means necessary. Jeffrey and Philip (Angus Sampson and Nathan Phillips) have been friends since childhood, and despite having aged they both remain locked in a perpetual cycle of arrested development. Loath to even utter the work "work" and obsessed with the daytime television drama "Sons of Surf," Jeffrey and Philip spend most of their days playing practical jokes on one another in their suburban trailer park. Upon hearing that "Sons of Surf" is facing cancellation and the show's beautiful star (Rachel Hunter) may be out of a job as a result, Jeffrey and Philip get up off the couch for the first time in years to ensure that their favorite show makes it to the next season. ~ Jason Buchanan, Rovi

Akmal Saleh
as The 3rd AD

Critic Reviews for You And Your Stupid Mate

There are no critic reviews yet for You And Your Stupid Mate. Keep checking Rotten Tomatoes for updates!

There are no featured reviews for You And Your Stupid Mate at this time.

You And Your Stupid Mate Quotes