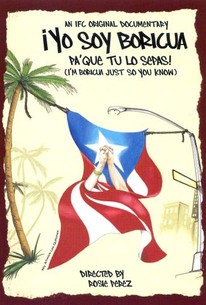 Actress Rosie Perez makes her directorial debut with this documentary about her heritage, Yo Soy Boricua, Pa'Que Tu Lo Sepas! (I'm Puerto Rican, Just So You Know!), which she co-directed with acclaimed documentarian Liz Garbus (The Farm: Angola, USA). Starting with the focal point of New York City's famed Puerto Rican Day Parade, Perez examines her culture, both from a deeply personal perspective, interviewing her sister and cousin about their sense of pride in their background and exploring the journey of her own family from the island to New York City, and from a broader perspective, looking at the island's rich, neglected history. The film explains how Spanish conquistadors nearly wiped out the island's indigenous population, and made Spanish the official language and Catholicism the official religion. The U.S. eventually took over the island during the Spanish-American War, making it a commonwealth, in which residents pay taxes and can serve in the military, but can't vote in national elections. The U.S. prized the island for its sugar plantations and its strategic proximity to the Panama Canal, but a vast percentage of its residents live in poverty to this day. The documentary takes an honest look at how residents of the island were used as guinea pigs by pharmaceutical companies, at how the U.S. government utilized forced sterilization in an effort to control the island's population, and at the bloody struggle for independence led by Pedro Albiza Campos. Operation Bootstrap, a government program to move islanders to the mainland, is also explored. Perez also celebrates the Puerto Rican poets, artists, and musicians that have impacted American culture, along with the island's unique influence on our language. The film had its New York premiere at the 2006 Tribeca Film Festival.

Has its heart in the right place and Rosie Perez is proud of her culture through the hardships and advantages...

There are no featured audience reviews yet. Click the link below to see what others say about Yo Soy Boricua, Pa'que Tu Lo Sepas!!