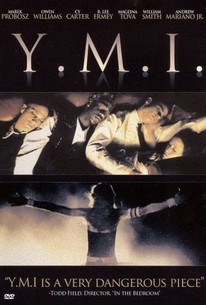 Three goth teens make a deadly pact before setting out on the last night of their lives and seeing their hopes and fears put to the ultimate test under the moonlit skies of Southern California. Digger (Owen Williams, Noisy (Cy Carter), and DVD (Andrew Mariano) are students under the tutelage of Roman Romanski (Marek Proposc), a teacher whose wife was brutally murdered and raped as he was forced to watch. Her killers have yet to be caught, though now as these three friends hear out into the California desert with the intention of ending it all, they will cross paths with pure evil in human form as their innermost hopes and fears are put to the ultimate test.

There are no critic reviews yet for Y.M.I.. Keep checking Rotten Tomatoes for updates!

There are no featured reviews for Y.M.I. at this time.