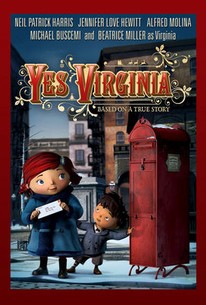 Eight-year-old Virginia O'Hanlon had always loved Christmas until the playground bully, Charlotte, tells her and the other children that Santa Claus doesn't exist. Not sure what to believe, Virginia and her friend, Ollie, venture into the streets of New York City to uncover the truth. Along the way, they encounter a Scraggly Santa who is trying to raise money for the less fortunate (he admits he's not the real deal, but someone who sort of works for Santa Claus), an over-eager librarian with a shelf full of Christmas books, and interesting advice from Virginia's quirky scientist father. Unable to find the answer, Virginia decides to write a letter to the New York Sun newspaper knowing that their reputation for reporting the facts is cemented by their motto "If you see it in The Sun, it's so!" Virginia's letter makes its way to the curmudgeonly editor, Francis Church, who feels he has better things to do than respond to a little girl's question. But, with Virginia's determination, and a little help from Scraggly Santa, Mr. Church is persuaded to write the answer that became the most famous newspaper editorial of all time: "Yes, Virginia, there is a Santa Claus!"

One of the best Christmas specials of the last decade.

There are no featured audience reviews yet. Click the link below to see what others say about Yes Virginia!