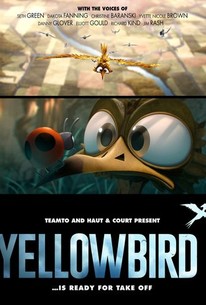 YELLOWBIRD is an animated feature film produced by Paris-based TeamTO Studio. Yellowbird (Seth Green) is a timid bird that falls from his nest and looses his family. He befriends Ladybug who encourages him to break free and see the world. On his first venture out into the world, he meets Darius (Danny Glover), a patriarch of a migratory bird family that is about to leave for winter migration to Africa. Darius dies, and it's Yellowbird's destiny to lead the flock to Africa for the winter. With the help of Darius's charming daughter, Delf (Dakota Fanning), the group has an exciting adventure that sends them to Paris, Holland, and over the vast Ocean. In this exquisitely animated tale of bravery, independence and the true meaning of friendship, families everywhere will fall in love with YELLOWBIRD. (C) Wrekin Hill

Kind of laugh-starved, watered down and blase, though bits of animation and the animated Euro-locations are nice

There are no featured audience reviews yet. Click the link below to see what others say about Yellowbird!