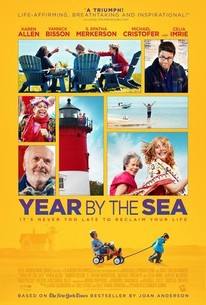 Year by the Sea Videos

Year by the Sea Photos

After 30 years as a wife and mother, an empty nester retreats to Cape Cod rather than follow her relocated husband to Kansas. Intent to rediscover herself but plagued with guilt, she questions her decision until stumbling upon a spirited mentor. Supported by her literary agent and a host of locals, including a sexy fisherman, our heroine learns to embrace the ebb and flow of life--ultimately discovering the balance between self and sacrifice, obligation and desire. Based on the New York Times best-selling memoir by Joan Anderson.

Graham King
as Luke
View All

News & Interviews for Year by the Sea

It Is Certified Fresh

View All Year by the Sea News

Critic Reviews for Year by the Sea

The dialogue consists of almost comically generic self-help pabulum, uttered with the pseudo sincerity of someone pretending it's something enlightening. It's not.

Instead of a hearty chowder of emotional highs and lows, first-time director Alexander Janko, who also adapted the script, settles for a diluted, Campbell's-Soup version of getting one's groove back.

"Year by the Sea" is for audiences who don't trust the shiftiness of nuance and craft, of messages that rise up from dramatic situations rather than being pasted on top of them, and who would prefer their life lessons stated loudly ...

The soundtrack alone, with its intrusive string of montage-backing soft rock tunes, could shut down less forgiving viewers.

A figurative and nearly retch-inducing celebration of the ovary.

The movie is not entirely my cup of tea, although it is refreshing in its depiction of diverse, older female characters.

Even though the movie's observations about relationship can veer into boilerplate self-help clichés, the cast-particularly Allen-is so good that you might not mind.

The world needs more films for older audiences, so such viewers can see themselves on screen and so the seasoned veterans that get these roles can continue to get work long after their superhero movie days are gone.

A quiet movie, as it should be. Joan finds herself because she slows down and listens to her own needs and wants, to nature and the day-to-day rhythms of the village she's become a temporary part of.

Joan will no doubt be relatable for many longtime spouses who have spent their lifetimes focused on the needs of their children.

The characters in the self-discovery melodrama Year by the Sea are in danger of drowning -- not in the cold North Atlantic waters, but in the tidal wave of maritime metaphors unleashed by the script.

"Sea" is little more than a lame excuse for good actors to embarrass themselves by uttering eye-rolling bromides about aging gracefully.

Audience Reviews for Year by the Sea

There are no featured audience reviews yet. Click the link below to see what others say about Year by the Sea!

Year by the Sea Quotes