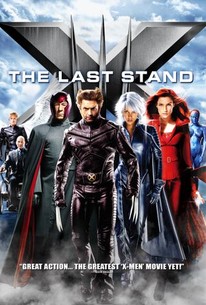 Critics Consensus: X-Men: The Last Stand provides plenty of mutant action for fans of the franchise, even if it does so at the expense of its predecessors' deeper character moments.

Critics Consensus: X-Men: The Last Stand provides plenty of mutant action for fans of the franchise, even if it does so at the expense of its predecessors' deeper character moments.

Critic Consensus: X-Men: The Last Stand provides plenty of mutant action for fans of the franchise, even if it does so at the expense of its predecessors' deeper character moments.

The explosive X-Men motion picture trilogy officially draws to a close with this release that finds Rush Hour director Brett Ratner stepping in for Bryan Singer to tell the tale of a newly discovered mutant "cure," and the polarizing effect it has on mutant/man relations. With the pressure on mutants to give up their powers and pledge alliance with the human race reaching a critical turning point, Professor Charles Xavier (Patrick Stewart) urges tolerance and understanding as his nemesis Magneto (Ian McKellen) gathers a powerful resistance in preparation for the ultimate war against humankind. Hugh Jackman, Halle Berry, Anna Paquin, and James Marsden return to reprise the roles they played in the previous two X-Men films, with Kelsey Grammer and Vinnie Jones joining the cast as Beast and Juggernaut respectively. ~ Jason Buchanan, Rovi

Josef Sommer
as The President

Zoltain Buday
as Mutant Cure No. 1

Sillier than the Singer versions, Ratner's movie is also -- for this less-than-reverent X-Men fan -- more satisfying.

X-Men: The Last Stand has shifted the shape of the franchise from pretty good, if uninspired, to terrifically entertaining.

[I] found myself strangely moved by the sense of relationships, friendly and unfriendly, coming to an end in a dull return to normality in the world of humans and mutants.

What a comedown, after the weirdly beautiful things Singer and his technicians did in the first two movies.

While the movie takes itself seriously, not to say solemnly, it's really an occasion for funny, frightening metamorphoses and spectacular effects.

The Last Stand is a hugely ambitious picture, and it would have been far more successful if Ratner had scaled it down to focus more on the interaction between the characters.

The film is successful in creating a complex moral universe, mostly due to the set-up from the previous films, but Ratner doesn't seem to know what to do with it.

While X-Men: The Last Stand closes out a trilogy of stories, it leaves a sour taste...

Overall, it really was disappointing, but at least it delivered some action, tidbits for the fans and a few suprises. The problem was that by the time they were done, the suprises didn't seem to mean as much as they should.

Ratner keeps the focus on the big questions.

X-Men: The Last Stand ends up being another -- albeit good -- comic book movie, rather than the exception to the rule that the previous films were.

To be honest there are none of the X-men movies I like, except for Last Stand, especially since this is the one X-men film that everyone seems to hate which I don't understand. I mean yes it does have a more action oriented director under the name of Brett Ratner (Tower heist, Red Dragon, Horrible Bosses,) But he did a good job at making this an extremely entertaining superhero film unlike the first two and the other films following. While the film does majorly prefer an action focus much more than a story focus and I know many X-men fans were pissed about that, I really didn't mind that, and I feel for the grand finale on the main trilogy of films (even if it hints twice at a sequel that never happened.) I like the inclusion of some of the other superheroes like Colossus, Archangel, and Jubilee (Even if they aren't really used to their full potential) and the inclusion of Juggernaut was just hilarious. And the film also did have some balls I think to kill off such a big characters such as Xavier *supposedly.* And while I don't remember much of the plot outside of the protection of a boy and a gene that can turn mutants into normal humans and the good guys are using it to fight the bad guys and Jean Grey comes back from the dead somehow, I don't really get a lot of it that much but all I really cared about in the end was how the film was all going to end and I think it came out with a satisfying conclusion to the trilogy, especially with the fantastic mutant battle. Again, while it is definitely stupid, I'd say give it a try and give it a chance unlike every X-men fanboy that bashes it.

While The Last Stand is a step down from X-2 thanks to a switch to the more action-oriented direction of Brett Ratner, it is nonetheless a highly entertaining installment in the franchise. Excellent set pieces and special effects are the highlights, while the plot is a little messy and underdeveloped. Regardless of its shortcomings, I enjoyed my time with The Last Stand and the new characters are fun to watch.

The first X-Men gave us promise. X2 made us proud to be comic book fans. X3 makes us want to cower down and cry. It's crap from the opening shot right to its cliffhanger ending, which is quite ironic since the film is titled "The Last Stand." There's no excuse for such sloppy, mismanaged execution especially when the budget is a whopping $210 million. It's really tough for me to explain how bad this film is because I could pretty much pick apart every scene and explain what is wrong with it. Too many characters, poorly written dialogue, clumsily staged and edited fight scenes, and awful CGI are just some of the many problems with X-Men: The Last Stand. I swear I have seen better use of green screen in student films. I hated X3. It's a slap in the face to fans of the source material and a complete nose dive off the cliff in comparison to the previous films in the series. Not since The Godfather Part III has the concluding act in a well-received trilogy been so monumentally awful.