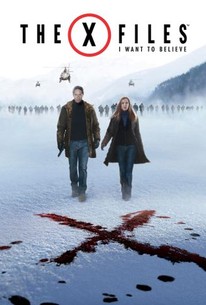 Critics Consensus: The chemistry between leads David Duchovny and Gillian Anderson do live up to The X-Files' televised legacy, but the roving plot and droning routines make it hard to identify just what we're meant to believe in.

Critics Consensus: The chemistry between leads David Duchovny and Gillian Anderson do live up to The X-Files' televised legacy, but the roving plot and droning routines make it hard to identify just what we're meant to believe in.

Critic Consensus: The chemistry between leads David Duchovny and Gillian Anderson do live up to The X-Files' televised legacy, but the roving plot and droning routines make it hard to identify just what we're meant to believe in.

The X-Files: I Want to Believe (The X Files 2) Photos

David Duchovny and Gillian Anderson reprise their roles as Fox Mulder and Dana Scully with this long-delayed big-screen continuation that revives the series six years after it headed off the air in 2002. Creator Chris Carter returns to direct, co-writing the script with series veteran Frank Spotnitz for 20th Century Fox. Billy Connolly, Amanda Peet and rapper Xzibit co-star in the stand-alone sequel.

Lorena Gale
as On Screen Doctor

News & Interviews for The X-Files: I Want to Believe (The X Files 2)

View All The X-Files: I Want to Believe (The X Files 2) News

Critic Reviews for The X-Files: I Want to Believe (The X Files 2)

Only a fan would be inclined to tolerate this dunderheaded mystery.

The best thrillers dig deeper than this one does, as did the best of The X Files on TV before the series ran out of steam.

A plot dug out of the serial-killer deep freeze.

I Want to Believe is too little, too late: a timid stab at reviving 1990s terror tropes in an age when the fuzzy fear of sci-fi has been replaced by darker and more real stories narrated by al-Qa'eda and CIA Black Ops teams.

Even the most devout X-Files fan may have their faith tested by this snoozy addition to the franchise, which glides into cinemas with all the urgency of a Dalek with a flat battery.

The X-Files isn't eye-bleedingly terrible. It's just not very good; it's an average episode of the TV series stretched to feature length.

As I watched, I found myself less engrossed in the various onscreen goings-on than I was in what was going through the actors' heads as they gamely went through their paces.

The film's ambition may well be to "stand alone" but, alas, it doesn't even stand up.

It's all gripping big-screen TV.

Time has moved on, and it is hard to find a reason to believe in what is presented here.

The movie-a big fat episode, essentially, with a noticeably constrained budget-is a satisfying thriller, with romantic and religious angst substituting for explosions and chase scenes.

I Want to Believe will be tossed on the heap with the rest of the unnecessary remakes, adaptations and sequels.

Audience Reviews for The X-Files: I Want to Believe (The X Files 2)

Would have been a pretty good two-parts episode of the show. As a big movie it's a little underwhelming and stuck in the same handful of places over and over. At least the showdown is wonderfully creepy and the final frame pretty strong.

I was a big fan of the TV series but missed some of the last two series. This is definitely set after the end of the last series, both agents are now doing other work and are no longer in the FBI, until they called upon to help with an X file type case. This could be viewed as a stand alone film on it's own if you never saw any of the TV series (Really?!) However it just plays more like an extended episode and not really the type of story line the fans want to see in an X files film. It's ok but wont satisfy fans that loved the show so much. There might be a 3rd next year!

Follow up to S Files: Fight For The Future is a different change of pace than the first Sci Fi Horror film that was so terrific to watch. Elements that made the first film so good are here, but they're watered down to make it less strainfull viewing on the viewer. The plot is more simpler and feels more like an episode of the X Files, at least thats how they could have done it. Moulder and Scully are called back in service to help investigate a series of bizarre disappearances. The film is a fairly decent film, but there is a feeling that the script could have been reworked a bit before being being green lit. The acting is decent enough to keep you interested and the story is intriguing, but it misses a little something to make it a much better, more developed plot for the film. Obviously this sequel would not be as strong as the first X-Files film, but the filmmakers manage to make an entertaining Sci Fi/mystery horror film. A good film to watch, but the sequel suffers from a lack of creative original ideas. The film could have played out as a two part episode of the show. This type of storyline could have been better off as an episode than an actual film. But the film is entertaining somewhat, it's good enough to entertain you, but it doesn't do anything phenomenal with the overall script. The film overall lacks the Horror Sci Fi elements that made the first one great. Still watchable. Just expect something average while watching this film.

So-so two hour tv episode. . the entire plot was even more absurd i think in retrospect. . you def did not need any xfiles knowledge prior to this.

The X-Files: I Want to Believe (The X Files 2) Quotes