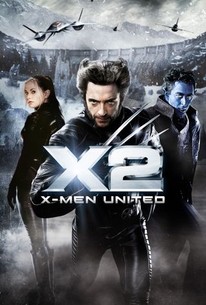 Critics Consensus: Tightly scripted, solidly acted, and impressively ambitious, X2: X-Men United is bigger and better than its predecessor -- and a benchmark for comic sequels in general.

Critics Consensus: Tightly scripted, solidly acted, and impressively ambitious, X2: X-Men United is bigger and better than its predecessor -- and a benchmark for comic sequels in general.

Critic Consensus: Tightly scripted, solidly acted, and impressively ambitious, X2: X-Men United is bigger and better than its predecessor -- and a benchmark for comic sequels in general.

When a failed assassination attempt occurs on the President's (Cotter Smith) life by the teleporting mutant Nightcrawler (Alan Cumming), it's Professor Xavier (Patrick Stewart) and his School for Gifted Youngsters who are targeted for the crime. While Jean Grey (Famke Janssen) and Storm (Halle Berry) try and locate the assassin, Cyclops (James Marsden) and Xavier (also known as 'Professor X') seek answers from their old foe Magneto (Ian McKellan) in his glass cell...Little do they know they're walking into a trap set by the villainous William Stryker (Brian Cox), a mysterious governmental figure that figures into Wolverine's (Hugh Jackman) secretive past, along with information about the X-Men's operation, supplied by Magneto through a mind-controlling agent. Meanwhile Wolverine, just home from a failed mission to regain his memory, is in charge of the students when a crack-commando team led by Stryker infiltrates the school by order of the President. With a mansion full of young, powerful mutants and the ferocious Wolverine in babysitter mode, can he defend the school against the one man who can answer his questions? What roles do the sinister Mystique (Rebecca Romijn-Stamos) and Lady Deathstrike (Kelly Hu) have in all of this? Why does Stryker want Professor X and his Cerebro machine? With the war between humanity and mutants escalating to extremes, can the rest of the X-Men trust their old foes to help them? Director Bryan Singer returns and raises the stakes in this sequel to the highly lauded 2000 adaptation of Marvel Comics' X-Men. ~ Jeremy Wheeler, Rovi

Glen Curtis
as Museum Teenager No. 1

Greg Rikaart
as Museum Teenager No. 2

Kendall Cross
as Cop No. 2

Aaron Douglas
as Stryker Soldier No. 1

Colin Lawrence
as Stryker Soldier No. 2

Brad Loree
as Stryker at Age 40

Jackie A. Greenbank
as President's Secretary

Robert Hayley
as Cop
View All

The truth is, the film is never again as good as its brilliant opening sequence.

X-Men 2 remains a decent enough sci-fi effort, which delivers on most of the levels fans could expect. Too bad it's hampered by a plot that wouldn't get green-lit for an average episode of Buffy.

The light tone and modest character development of X-Men have given way to an avalanche of digital effects and a bloated symphonic score.

Fortunately, bigger usually equals better here, and when it doesn't, it equals just as good.

Performances are solid throughout, with the actors managing to straight-face their way through some truly inane dialogue.

There's little zest, less grace and, particularly in the writing, no creative spark to ignite the imagination.

X2: X-Men United is better than its predecessor in every way.

Spends way too much time reverently aggrandising its mutant/outsider theme, when in reality we're talking about people with non-pitiable superhuman skills.

Like the first movie, it wraps everything up in spectacular action scenes powered by special effects that are all the more impressive because director Bryan Singer does not let them overwhelm the other elements of the movie.

A movie that seemed great in the theater in 2003 that has not held up thanks to social progress and the franchise's complete disregard for continuity.

X-Men works because it isn't about the effects. It's really about being different (in this case, a mutant). That's why it resonates so with its adolescent fans.

My favourite of the triology. The special effects and fights are great!

The best X-Men movie to date, X-2 set the bar for comic book movies when it was released and featured an improved blend of science fiction and political thriller that started with the first. Expanding the roster and featuring big name actors with solid performances, X-2 was bigger and bolder than its predecessor and better in every way.

X2: X-Men United not only improves on its predecessor in every way, it creates a stunning universe populated with incredible characters. Everything I loved about the original is here while its missteps have been corrected. This is truly a great film and one of the best sequels in recent memory. It begins with an incredible effects display as Nightcrawler takes out a whole security team. Then it builds on its story, tying in Wolverine's past with a psychotic military general set to eradicate mutants off the planet with an ingenious and diabolical scheme. The action has been kicked up a few notches, complete with plane chases, sieges, and a Wolvering vs Lady Deathstrike fight that is just outstanding. With so many characters to follow it would have been easy to stumble with development. But every character has his or her own conflict to deal with, and it is resolved by the end. The film juggles its side plots incredibly well, even giving the villain a moment for us to sympathize. Expertly crafted to a fault, X2 is the X-Men franchise at its peak, in hopes that future installments will continue to amaze me the way this one has.