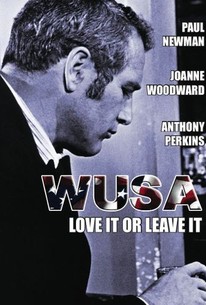 Paul Newman served as co-producer of this allegorical drama and stars as Rheinhardt, a opportunistic drifter who ends up in New Orleans and hits up his old friend Farley (Laurence Harvey), a con man-turned-phony preacher, for a job. Farley is able to get Rheinhardt hired on as an announcer at a local radio station, WUSA, but the station is a right-wing propaganda mill that devotes its air time to venomous tirades against political and social progress. Rheinhardt is happy to be making decent money, and he makes the friendly acquaintance of a local working girl, Geraldine (Joanne Woodward), so he refuses to look his gift horse in the mouth. However, when he finds out that WUSA is actually involved in shadowy political actions, he is at a loss for what to do, especially after a naïve and troubled social worker (Anthony Perkins) is tricked into starting a race riot. Robert Stone wrote the screenplay, adapted from his novel A Hall of Mirrors.

Preservation Hall Jazz Band
as Themselves

Rosenberg... in his second collaboration with the most famous blue-eyed actor in film history, has rarely been so inspired. [Full Review in Spanish]

...serves as a nostalgia-inducing oddity, a kind of scrapbook of American sensibility at the end of the 1960s, a time when there really were people ... who believed we were on the brink of revolution

... the film hammers home its politics with blunt force yet leaves the conspiracy drama vague, more symbolic gesture of outrage than convincing plot.

There are no featured audience reviews yet. Click the link below to see what others say about WUSA!