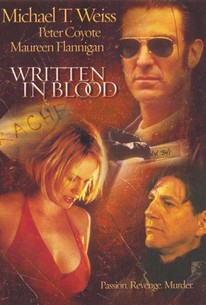 John Terlesky's psychological thriller Written in Blood concerns a police detective named Matt Ransom who attempts to clear the name of his partner after the partner is convicted of killing his wife. The investigator uncovers a web of people who might have been responsible for the crime, but he begins to mistrust his now incarcerated partner, who might be trying to manipulate Matt.

Critic Reviews for Written in Blood

A thriller without any thrills...

Despite what the back of the DVD case says, the flick's not really a "nail-biter," nor is it "throbbing with passion and thrills." (Who writes this stuff anyway?)

Seldom rising above the ordinary...not even its clever Sherlock Holmes premise can save it from mediocrity.

you have to suffer through the film looking at Michael T. Weiss's ridiculous hairstyle

doesn't make a lick of sense

Audience Reviews for Written in Blood

There are no featured audience reviews yet. Click the link below to see what others say about Written in Blood!