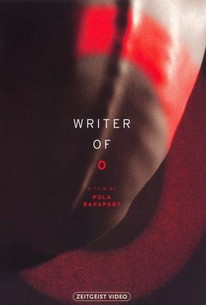 In 1954, one of the most notorious erotic novels of the 20th century was published -- The Story of O by Pauline Reage, which chronicled in breathless detail the intense sadomasochistic relationship between a submissive woman and a dominant man. For many years, many believed that Pauline Reage was a pseudonym for a male author, but as it turns out that was only half true. In 1994, journalist John de St. Jorre, while researching a book on Olympia Press (the fearless French publisher who first published the book) learned that Pauline Reage was in fact Dominique Aury, a well-respected and outwardly straight-laced editor for one of Europe's most prestigious publishing houses, Gallimard, who wrote the salacious volume for her lover, another powerful editor at Gallimard, Jean Paulhan. American filmmaker Pola Rapaport, who was powerfully effected by reading The Story of O, traveled to Paris to meet and interview Aury a few years before her death, and Writer of O is a documentary which blends the story of Aury's remarkable life and times with re-creations of scenes from her best-known work.

Dominique Aury
as Herself

John de St. Jorre
as Himself

Barney Rosset
as Himself
View All

Critic Reviews for Writer of O

The real reason to see this slight but interesting documentary is to watch and listen to the radiant Aury.

[Aury] provides this talking-heads documentary with most of its vitality.

Because it doesn't have the heroic impact the filmmaker seems to have been looking for, she's forced to juggle, to diminishing returns. In the process, she raises more questions than she resolves.

A dry compendium of talking-head interviews interspersed with lackadaisical dramatizations of scenes from the novel.

It is a mash note from first-time filmmaker Pola Rapaport to Aury, but its attempts to dramatize passages of the book are at odds with Aury's advice that Story of O was a piece of writing 'not meant to be spoken.'

Rapaport intersperses her reflections and those of people who knew her with dramatizations.

An illuminating examination of censorship and sexuality.

Had 'Writer of O' featured more of the engaging aged Dominique Aury and less pseudo-literary and -psychological speculation, it would have been on surer footing.

Audience Reviews for Writer of O