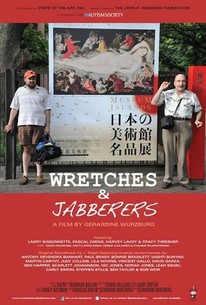 Directed by Academy Award (R) winner Gerardine Wurzburg (Educating Peter), WRETCHES & JABBERERS follows two men with autism, Tracy Thresher and Larry Bissonnette, who embark on a global quest to change attitudes about disability and intelligence. Determined to put a new face on autism, the men travel to Sri Lanka, Japan and Finland, where at each stop they challenge public attitudes about autism and issue a hopeful message to reconsider competency. A poignant narrative of personal struggle that rings with intelligence, humor, hope and courage, WRETCHES &JABBERERS is about the life-sustaining power of relationships - the personal connections that people make through communication. WRETCHES & JABBERERS features the song, "The Reasons Why," by composer J. Ralph (The Cove, Man on Wire), which recently qualified for nomination consideration in the Original Song category for the 83rd Academy Awards (R). The documentary's soundtrack features original songs written and produced by J. Ralph and collaborations with Antony, Devendra Banhart, Paul Brady, Bonnie Bramlett, Vashti Bunyan, Martin Carthy, Judy Collins, Lila Downs, Vincent Gallo, David Garza, Ben Harper, Scarlett Johannson, Nic Jones, Norah Jones, Leah Siegel, Carly Simon, Stephen Stills, Ben Taylor and Bob Weir. The WRETCHES & JABBERERS album was released on January 11, 2011, and a share of the profits will be donated to the Autism Society and the Wretches & Jabberers Fund of the Institute on Communication and Inclusion at Syracuse University. WRETCHES & JABBERERS is partnered with the Autism Society to theatrically release the film in April 2011 to commemorate National Autism Awareness Month. Area 23a, the specialized distribution company that focuses on event-driven films, will open the feature-length documentary across the U.S. as "movievents," which include a screening of the film and a live panel discussion featuring Tracy Thresher and Larry Bissonnette, self-advocates with autism, along with autism educators and family members who deal with the challenges of autism on a daily basis. -- (c) Area23a

Though the movie can be a bit meandering at times, Wurzberg deserves credit for keeping the focus on her subjects' humanity without being self-conscious about doing so.

"Wretches and Jabberers" is a moving and eye-opening testament to the desire of autistic people to be a part of the world, not apart from it -- or at least to be understood.

An eye-opening and most entertaining doc about a group of autistic people who challenge old misconceptions about the disability.

The film is maddeningly vague about how the two men made their initial breakthroughs, but it certainly is proof that even those who are written off as children can find a voice.

More info packet than a story, the film is carefully designed for unambiguous impact.

The ability to mix humor and emotion is the strong suit of this upbeat, music-saturated docu.

It's by engaging with all these extraordinary people that the film's beauty reveals itself.

Autistics must communicate and this film shows how. Or does it? Academy Award winner Gerardine Wurzburg ("Educating Peter") will take you by surprise with this upbeat and educational film about autistics who are breaking through.

If it's possible to make a happy movie about people whose brain chemistry makes it difficult for them to communicate their needs and show their intelligence to others, this is it.

You want to tell the filmmakers to get on with it, and to more eloquently detail the rest of Tracy and Larry's story beyond their occupation.

There are no featured audience reviews yet. Click the link below to see what others say about Wretches & Jabberers!