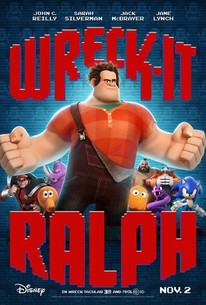 Critics Consensus: Equally entertaining for both kids and parents old enough to catch the references, Wreck-It Ralph is a clever, colorful adventure built on familiar themes and joyful nostalgia.

Critics Consensus: Equally entertaining for both kids and parents old enough to catch the references, Wreck-It Ralph is a clever, colorful adventure built on familiar themes and joyful nostalgia.

Critic Consensus: Equally entertaining for both kids and parents old enough to catch the references, Wreck-It Ralph is a clever, colorful adventure built on familiar themes and joyful nostalgia.

Ralph (John C. Reilly) is tired of being overshadowed by Fix-It Felix (Jack McBrayer), the "good guy" star of their game who always gets to save the day. But after decades doing the same thing and seeing all the glory go to Felix, Ralph decides he's tired of playing the role of a bad guy. He takes matters into his own massive hands and sets off on a game-hopping journey across the arcade through every generation of video games to prove he's got what it takes to be a hero. On his quest, he meets the tough-as-nails Sergeant Calhoun (Jane Lynch) from the first-person action game Hero's Duty. But it's the feisty misfit Vanellope von Schweetz (Sarah Silverman) from the candy-coated cart racing game, Sugar Rush, whose world is threatened when Ralph accidentally unleashes a deadly enemy that threatens the entire arcade. Will Ralph realize his dream and save the day before it's too late? -- (C) Disney

Fizzy, colourful and intricately plotted, this 2012 pop meta-fiction from The Simpsons' Rich Moore does for vintage arcade games what Who Framed Roger Rabbit did for the Golden Age of Animation.

The film is nicely animated but confusing enough to be almost impenetrable at times.

I found the idea of teens laying down their coins to play arcade games in this present day a strange, semi-intentional archaism - nostalgic wish-fulfilment on the part of the middle-aged people creating the movie.

Play an actual videogame instead.

The chubby 3D animation, smart-alecky product placement and potty humour all capped my enthusiasm about halfway to total delight.

Disney's found a lot to play with here, but you may find yourself itching to take the controls.

Grab those quarters (one roll is $10....the average price of a movie ticket) and get on the Sugar Rush ribbon highway to fun and climb the leaderboard with Wreck-It Ralph!!

Fun, sweet and joyous, Wreck-It Ralph is brilliant and not one to be missed.

Never bludgeons over the head with the message either, instead giving us a smartly crafted and highly entertaining film that is as pleasing for children as it is for adults.

Phil Johnston and Jennifer Lee's screenplay is heartfelt, especially as the relationship between Vanellope and Ralph develops, sprinkled with just enough gaming references to appease the hard-core gamer.

So some things to like but overall just not my cup of tea I suppose... Not everything needs or should be made for my interest and tastes. I can deal with that.

The arcade is just window dressing for a sugar rush of child-friendly product placement.

It is not always that we see a visually stunning animation with such a well-written script full of originality, welcome references and dozens of narrative elements that are brought together so brilliantly into a very funny, entertaining and also incredibly moving experience.

A family feelgood movie that amuses and send a heartwarming message!

Reilly gives warmth to a big lug who only seems to destroy anything he touches (maybe somebody's goofy and kinda lost dad?), while Silverman gives understandable yearning to a soul aching to belong (a little girl lost?) ... can these two from broken homes fix the other's pain? Over this quandry is an animated love-in visit to vid games of old, which helps to soften the sensitive subject matter. Pretty damn good if you ask me.