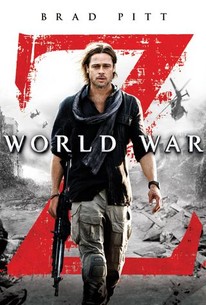 Critics Consensus: It's uneven and diverges from the source book, but World War Z still brings smart, fast-moving thrills and a solid performance from Brad Pitt to the zombie genre.

Critics Consensus: It's uneven and diverges from the source book, but World War Z still brings smart, fast-moving thrills and a solid performance from Brad Pitt to the zombie genre.

Critic Consensus: It's uneven and diverges from the source book, but World War Z still brings smart, fast-moving thrills and a solid performance from Brad Pitt to the zombie genre.

The story revolves around United Nations employee Gerry Lane (Pitt), who traverses the world in a race against time to stop a pandemic that is toppling armies and governments and threatening to decimate humanity itself. (C) Paramount

As both thrilling spectacle and escapist summer entertainment, World War Z is enormously effective, with Brad Pitt at the center hopscotching the globe in search of the origin of a zombie apocalypse.

Pitt conducts himself manfully throughout the proceedings -- he is never less than believable while facing off against this pandemic -- but if I never see another zombie in the movies, I will not feel deprived.

If you need proof that sometimes more can be less, here you go.

As compelling as Pitt is at reflecting the world's pain through Lane's eyes, the movie treats him too often as if he truly is the only one with loved ones to lose or a world to save.

World War Z is the zombie film for people who are too afraid to watch zombie films.

It will stress you out. It will mess you up. But you're still going to love living through every last dismembered bit of World War Z.

World War Z is not the complete, absolute disaster tales of its production suggested may come to pass (what with an entirely reshot third act). But that's the limpest compliment that can be given.

Like it or not-and I don't love it-World War Z does get under your skin.

Moviegoers should run, not shamble, towards the nearest multiplex.

This entry into the summer blockbuster season features some really great action sequences mixed with a little more intelligent banter than one might expect from your typical popcorn fare. It's kind of an art house version of a zombie flick.

Now I'm not a huge zombie person as much as some other people are and this isn't a gore hounds dream of a zombie film (Thank you PG-13) but I will admit I was generally surprised for what I got considering the trailer didn't intrigue me that much. The acting in World War Z is mainly hit or miss in my mind. Brad Pitt, while not a huge fan of his work, does a very good job here and gives a very legit serious performance. Mireille Enos does a very good job as the wife of Brad and does get a few very well pulled off emotional moments. My favorite actor in the film though is Danielle Kertesz who plays a foreign soldier who helps Brad Pitt through Israel and the hospital at the end of the film who has her hand amputated off due to getting bitten and keeping it from spreading. She gives a very good emotional performance and she definitely knows how to pull off the very intense moments in the film. The rest of the cast does well but they don't really focus on a lot of the side characters in the film, mainly its just Pitt, the wife, and the soldier, so a lot of the side characters are either forgettable and just there to die, or just give a passable performance. Now the effects. This is the one thing I was mainly concerned about, because in all the trailers, they show the massive amounts of zombies piling on top of one another and running in MASSIVE groups and it is painfully obvious CG and looks pretty laughable from far away, but up close the zombie makeup actually looks very good and the makeup does have some fantastic details to it, especially the teeth and hair on some of the zombies, especially the last one near the end of the film. And some of them have very graphic detail to them which I was genuinely pleased with that they at least made them look like zombies unlike some other zombie films in the past few years. Now the horror element. Considering it is a zombie movie you would expect some suspense and jump scares, and this is my one problem I have with the film, the jump scares are very predictable, and I was even talking to my friend (Very quietly I might add) in the theatre during the jump scare scenes and saying, this would've worked so much better if they did this. One example is a zombie is shown on a stretcher in a flashback explanation scene asleep, the doctor is examining the zombie while dormant, and at one point puts his ear to the zombies face, now I thought it was going to be that the zombie was going to bite him while his face was right there, which would've been a very good jump scare, but he backs up and they zoom on the zombies face and its eyes open up, which killed the whole jump moment. The movie is just full of these moments that kill the jumpscares by anticipating them. It's almost like the film is to scared to actually scare the audience which is not a good sign for a zombie movie. And I've seen jump scares done very well in other PG-13 films such as Mama and the Grudge and it is just sad that they don't utilize jumps that well. That is until the last act of the film where Brad Pitt and the soldier are in a research facility with a few other people where they have to find the cure so they have to go into the other half of the building, only problem is that the whole other half of the building is crawling with the other infected doctors and scientists, so some of the doctors, Pitt and the soldier have to sneak through there without alerting the zombies, and this is where I think the suspense is just phenomenal. The whole scene builds up so well having the first half of the scene in quiet while the people slowly have to sneak stealthily through the zombies without getting caught. And there is one scene where Pitt is in the medicine room locked in and I think this scene is arguably one of the best suspense scenes I've seen in a film. I won't ruin it but it is just fantastically creepy and makes you feel so anxious on whats going to happen. Overall, while this isn't the best Zombie film I've seen, I feel that the film has some fantastic elements of a zombie film, adds a couple things, has some good suspense (near the end), good acting, good writing, and some great makeup. I'd say it's at least worth one viewing if you can get over how cheap the CG looks at points and how predictable the jump scares are.

A forgettable and unoriginal zombie movie in times when the theme has already been explored and re-explored ad infinitum, and it cannot even justify its existence, being completely unclear about its actual purpose - hell, it hardly manages to be entertaining.

There is so much wrong with this adaptation of the Max Brooks penned book, but that's an entirely different review. I just want to address what I dislike about this particular film and all its shortcomings. What bothers me most about this film is that without the association of the bestselling book, this film wouldn't be paid any mind. It's sloppy, especially when it comes to the CGI wall of zombies, which is over-simplistic and an obvious McGuffin, as are many contrived plot devices that spur forth the plot. The only similarity to the source material is the use of multiple countries, which is so obviously forced to accommodate the change in script. Brad Pitt (who is just playing himself) is given Christ-like status as he is the only one who can travel around the world, not get infected, save the life of an Israeli soldier, and find a solution to the virus. Instead of detailing the worldwide economic, political, and military interventions of a zombie war, this film just follows one inept guy as he lucks out again and again against the zombie foe. The ending is the most infuriating aspect, as it leaves everything on an ambiguous note, even though the entire film follows the one person who can supposedly save the world, and he does. Turning a book about the real world impact of a zombie apocalypse into a point and click adventure starring Brad Pitt means you cannot finagle an up in the air ending to seem deep. Either they should have streamlined it further in order for it to be another zombie film, or the book should never have been adapted, which would have made everyone happy in the first place.

Surprised to see Brad Pitt stop the zombie plague half naked in a hotel room with nothing but a cowboy hat and a blow dryer.