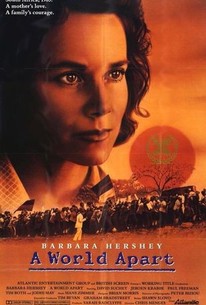 Cinematographer Chris Menges' first directorial effort, A World Apart was inspired by the lives of South African journalist Ruth First and her daughter Shawn Slovo (who wrote the film's screenplay). Barbara Hershey plays the fictional counterpart to Ms. First, Diana Roth, with Jodhi May as her daughter. Told from the daughter's viewpoint, the film shows us that Diana and her husband Jeroen Krabbe are so busy with their anti-Apartheid political activism that they totally shut May out of their lives. In 1963, Hershey is arrested by the South African police, becoming the first white woman to be held under the infamous 90-day-detention act. Left despondent and suicidal by two separate arrests and by constant harassment from the police, Diana still won't include her daughter in her life until the girl presses the issue in a climactic confrontation. Some critics felt that Shawn Slovo was using A World Apart to settle unresolved issues in her own life: Ruth First was killed under suspicious circumstances in 1982, without ever reconciling with her daughter.

Jodhi May
as Molly Roth

Lovemore Majaivana and the Zulu Band

Critic Reviews for A World Apart

It is strong, angry and troubling.

Has anyone ever captured that delicate tightrope walk between child and adult as poignantly and delicately as Jodhi May does in her characterization of Molly in this film?

Admirable politics, presented in a complex and sensitive manner, is certainly reason enough to recommend A World Apart. But much of the power of this film lies in the fact that it is visually stunning.

It is an honest and intelligent piece of work, and its thrust is humane, not doctrinaire.

... there is a strong social consciousness and political content, but [Chris] Menges also brings a subdued dramatic atmosphere and rich visual sensibility to the film...

A piercing examination of a family whose ruling passion is social justice.

Audience Reviews for A World Apart

There are no featured audience reviews yet. Click the link below to see what others say about A World Apart!