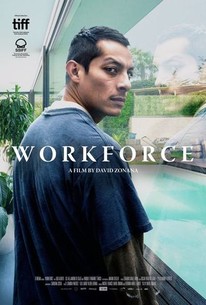 Francisco and a group of construction workers are building a luxury house in Mexico City. Following the accidental on-site death of his brother, Francisco learns that his widowed sister-in-law will not receive compensation from the wealthy owner of the house. After enduring a succession of further abuses against himself and his colleagues, and having made several attempts to obtain justice, he finally takes the law into his own hands -- but will the world he's fighting against end up consuming him?

Though modestly made, this drama is both fleet - at just 82 minutes - and very precise, steadily working its way toward a payoff that is understated yet packs a punch.

It's a taut, concise, bracingly uneasy film, all the more involving because it starts off promising a realistic drama of the working life, almost in a Loachian vein, then becomes something else entirely, something closer to an absurdist political parable.

This feature debut from writer-director David Zonana progresses like a quietly humming thriller, with each scene contributing to the film's gathering power.

Zonana's righteous anger doesn't manifest in hand-wringing. Rather, in the Neo-Realist tradition, it's greed and hubris that results in tragedy: the Greek Gods here being the capitalist system which forces its denizens always to aim upwards.

A convincing portrait of how fantasies are unsustainable in our cruel and pessimistic world. [Full Review in Spanish]

Workforce never shies away from depicting the struggles of the real world even in the midst of its fable-like story. This is a movie about solidarity, but solidarity that seems to be on the turn, on the verge of curdling into something else entirely.

A priceless bit of neo-realism effectively casting non-actors as exploited workers building a house from scratch for an uncaring, exploitative rich man.

Director David Zonana offers a highly original provocation, which looks at the injustice of the class divide with a cool, satirical eye.

Zonana is able to capture the abstract power that uncertainty has over their lives...elegantly expressing the strength that can emerge from a little communal generosity and the weakness of a society that has no place for them.

An intimate and naturalistic study of Mexico's social class divide and the seduction of power. [Full Review in Spanish]

A... promising and more than hopeful debut. [Full review in Spanish]

There are no featured reviews for Workforce (Mano de obra) at this time.