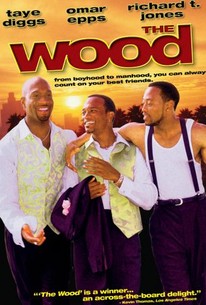 Critics Consensus: A charming piece of work with believable characters.

Critics Consensus: A charming piece of work with believable characters.

Critic Consensus: A charming piece of work with believable characters.

A man who's uncertain about the biggest step forward of his life steps back to take a look at his younger days in this comedy/drama. Roland (Taye Diggs) is a few hours away from getting married, and he is starting to have second thoughts; as much as he loves his fiancée, he can't stop thinking about Tanya (Tamala Jones), his first serious girlfriend in high school. Roland is hanging out with his two best friends, whom he also first met in school, Mike (Omar Epps), a solid regular guy, and Slim (Richard T. Jones), a flashy personality who plays pro basketball in Europe. They talk about the old days and flash back on growing up in Inglewood, California (nicknamed "The Wood") in the 1980's, when Run DMC and Eric B & Rakim were the happening sounds, and guys used to argue over who was hotter, Vanity or Apollonia. At the last minute, Roland takes off, wanting to pay Tanya a visit, and Mike and Slim are determined to track him down and make sure that he gets to the altar on time. The Wood was the debut feature film for writer/director Rick Famuyiwa, whose first short subject, Blacktop Lingo, won an enthusiastic response at the 1996 Sundance Film Festival.

Tia Gainer
as Girl at Dance

Howard Thompson
as D.J. at Dance

Douglas Shamburger
as D.J. on Radio

Brandi Wilson
as Girl at Dance

Christina Milian
as Girl at Dance

Dawnn Lewis
as Woman in Cleaners

Crystal Grant
as Girl with Slim

Alecia Smith
as Girl with Roland

Kongit Farrell
as Girl with Slim

Stacey Arnell
as Woman with Stacey

News & Interviews for The Wood

Why 1999 Was The Ultimate Year for Teen Movies

View All The Wood News

Critic Reviews for The Wood

An across-the-board delight featuring a spot-on ensemble cast that treats the most awkward and embarrassing moments in the rites of passage with affectionate hilarity.

Even the charismatic Epps can't bail out a script that lacks tension, too often substitutes high-fives for dialogue or action and calls for farce scenes that used to get 'em rolling in the stone aisles of ancient Greece.

This rambling and episodic autobiographical saga of three friends coming of age in Inglewood, Calif. in the '80s is so determined to be likable that it forgets to be interesting.

This is a comfort-food movie, predictable but satisfying. Also, by jumping between the late '80s and the late '90s, the film offers a treasure trove of old-school music.

It wants to be Boyz in the Hood (Boyz in the Wood) but the obscenity laced dialogue and raw objectification of woman renders it a contrite pretender more along the lines of Booty Call and Trippin.

Never delves much deeper into the three friends' psychology than a sitcom pilot would, though the cast try their best.

A charmer, a heartfelt memoir full of the buoyant good spirits and free-wheeling fun that, say, American Pie never had.

A well-intentioned exercise in humanism... but as art or a successful narrative, the movie is ultimately empty.

Heartfelt honesty and a determined refusal to resort to exploitative stereotypes help make The Wood an uncommonly uplifting experience for audiences of all races and backgrounds.

Audience Reviews for The Wood

This was a good little flashback movie, and though it was enjoyable, I found a lot of the scenes a bit long: its style is too glossy to feel truly authentic even though it sometimes seems realistic, and as such, the film drags a bit. Richard T. Jones steals the show, though, and Omar Epps turns in a strong performance: all in all, a decent flick, definitely worth watching.

great flick, reminded me of my youth

Only half as good as I'd hoped. The two stars are for the flashbacks. The present-time material needs work.