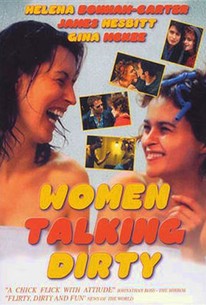 British director Coky Giedroyc's sophomore feature outing concerns a pair of working class women in Edinburgh, Scotland. Down-to-earth Ellen (Gina McKee), a noted cartoonist, invites her wacky, outgoing best friend Cora (Helena Bonham Carter) to a post-divorce party. Ellen is recovering from an ill-fated marriage to the rakish Daniel, a compulsive gambler and philanderer. Cora broke up with her love 'em and leave 'em French lover Claude, who left her with a child. Told largely through flashbacks, the film charts the rise and fall of the two relationships, remembered by the pair as they bond over drinks. Later, a revelation suddenly strains Cora and Ellen's old and dear friendship. Women Talking Dirty was screened at the 1999 Toronto Film Festival. ~ Jonathan Crow, Rovi

There are no critic reviews yet for Women Talking Dirty. Keep checking Rotten Tomatoes for updates!

There are no featured reviews for Women Talking Dirty at this time.