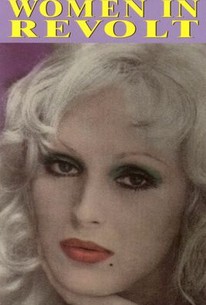 Andy Warhol produced this mordant satire of the women's movement, directed by Paul Morrissey and staring a trio of female impersonators. Candy (Candy Darling) is an aloof heiress caught in an unhappy relationship with her brother. Jackie (Jackie Curtis) is a virginal intellectual who believes that women are oppressed in contemporary American society. And Holly (Holly Woodlawn) is a nymphomaniac who has come to loathe men, despite her attraction to them. Together, they join a militant feminist group, P.I.G. (Politically Involved Girls), but their newfound liberation doesn't make them any happier; Jackie gets mixed up with a male hustler and winds up as an unwed mother, Holly becomes a homeless alcoholic, and Candy tries to make a go of show business via the casting couch. Several other Warhol/Morrissey "superstars" appear in supporting roles, including Jane Forth, Geri Miller, and Maurice Braddell.

Critic Reviews for Women in Revolt

Audience Reviews for Women in Revolt

There are no featured audience reviews yet. Click the link below to see what others say about Women in Revolt!