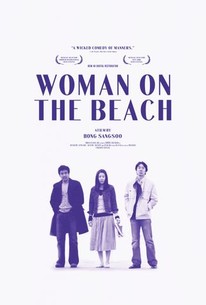 Critics Consensus: Hong brings his usual light touch to this well-acted salvo in the battle of the sexes.

Critics Consensus: Hong brings his usual light touch to this well-acted salvo in the battle of the sexes.

Critic Consensus: Hong brings his usual light touch to this well-acted salvo in the battle of the sexes.

Woman on the Beach Photos

Widely regarded as acclaimed Korean filmmaker Hong Sang-soo's finest cinematic accomplishment to date, Woman on the Beach concerns Kim Joong-rae (Kim Seung-woo), a mercurially tempered writer/director drafting a screenplay during his stay at an off-season oceanside resort. Joong-rae becomes acquainted with two female vacationers, each of whom unwittingly exposes undercurrents of hostility and self-destructiveness inside of him; he then uses the encounters as script fodder. The film represents Hong's exploration of the machismo, aggression, and hostility that typically lie at the core of the male id and are often exercised in masculine behavior. Woman on the Beach was screened at the 2006 New York Film Festival, at the Film Society of Lincoln Center.

News & Interviews for Woman on the Beach

Critical Consensus: Bucket Gets Kicked, The Orphanage is Certified Fresh, In the Name of the King Not Screened

View All Woman on the Beach News

Critic Reviews for Woman on the Beach

Woman on the Beach, perhaps [director Hong's] most accessible film (and often a funny one, too), is a good introduction, even if it is not a masterpiece. Here's hoping more of his films see the light of an American day.

A richly satisfying film that compassionately probes the human heart while preserving its elusive mysteries.

You won't need a degree in Korean cinema to anticipate that complications will arise.

The scenery's great and the performances adequate, but wake me when it's over.

Woman on the Beach is like a scoop of vanilla ice cream, it's not going to wow anybody, but it's universally tolerable on a simplistic level.

It internalizes all the structural games that ... will come to so typify his work. A high point in his career ... melding satire and sincerity, emotion and farce.

Hong Sang-soo's "Woman on the Beach" is his most complicated film, yet it seems his most accessible.

None of it is very compelling, thanks in large part to Hong's painfully perfunctory camera style.

Audience Reviews for Woman on the Beach

I enjoyed this work by Hong, one of his more accessible works. Again about man-woman relationships and this one is entertaining, with some philosophical sidebars on fixations, obsessions. It is quite watcheable and easy to understand, moreso than "woman is the future of man". Enjoy..

Hong continues to dissect relationships between men and women, using his unique voice. His strength comes in balancing the arguments between the characters. Woman on the Beach is far more talkative than his earlier, Virgin Stripped Bare By Her Bachelor's. Here, the verbal philosophical musings of the main characters take center stage. Like his previous work, this is a thoughtful film. Thus, it can take a while to get going.

[font=Century Gothic]In "Woman on the Beach," Moon-sook(Ko Hyun-Joung) is not Chang-wook's(Kim Tae-Woo) boyfriend, no matter what he may think. But regardless of the circumstances, she accompanies him as he goes to an off-season resort town with Joong-rae(Kim Seung-Woo), a film director who is hoping to finish the script he is working on. But nothing comes easy. Oh well. At least, Moon-sook is interested in him...[/font] [font=Century Gothic][/font] [font=Century Gothic]"Woman on the Beach" is a moderately engaging movie about miscommunication and relationships. The deliberate pace and long takes(but not the accompanying zooms and close-ups) work in the movie's favor but it is simply too long for something as inconsequential as this. Instead of letting the action unfold naturally, writer-director Hong Sang-soo takes a rather clumsy and forced approach to the material. And the last bit of symbolism is too obvious.[/font]

Woman on the Beach Quotes