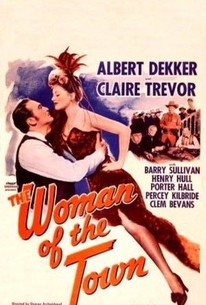 In this film, Bat Masterson becomes marshal of Dodge City after failing to secure a job as a reporter. Preferring socializing to peacekeeping, Masterson falls in love with Dora Hand, a golden-hearted chorus girl. When Dora is shot down by cattle baron King Kennedy, Masterson begins taking his job seriously.

Russell Hicks
as The Publisher

Critic Reviews for The Woman of the Town

A good cast makes it worth watching despite all the sentimentality.

There are no featured reviews for The Woman of the Town at this time.

The Woman of the Town Quotes