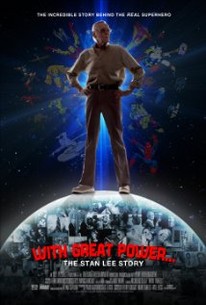 At 88 years old, Stan Lee's name appears on more than one billion comics in 75 nations in 25 languages! Arguably the most recognized name in comics, Stan Lee has co-created over 500 legendary pop culture characters. The vivid life and imagination of Stan Lee from the early days of his Great Depression era upbringing through the Marvel age of comics and beyond is explored, uncovering original transcripts, illustrations, photographs and stories of Lee's journey from his early years at Timely Comics, his World War Two military service, the comic book industry's censorship battle of the 1950's led by Dr. Fredric Wertham, the dawn of Marvel Comics and the legendary characters Stan co-created, to his current company POW! Entertainment.

Critic Reviews for With Great Power: The Stan Lee Story

A great documentary for families!

A hagiographic valentine constructed by overly excited fanboys. Lee's imprint on popular culture deserves better and deeper than this.

Audience Reviews for With Great Power: The Stan Lee Story

I'd take Peter Parker over Superman any day! This movie is the genius behind all those comic books that are still loved decades later. The best parts were the tender moments with his wife.

Very interesting introspective on one of the icons of the comic book industry.

Stan Lee is a legend in every sense of the word. He is the man behind the Fantastic Four, X-Men, Spider-Man, Iron Man, and hundreds of other comic book characters. This is a documentary made for the channel Epix, and it is fantastic. Covers his life, his career, his marriage, and you really learn a lot about the man behind the superheroes. It's a great story, and not just a "oh lets kiss Stan Lee's butt" movie, but a real look at the man. There is a scene where his wife reads a card he wrote for her, that is so sweet it make you wanna cry. At 80 minutes long the movie maintains a great pace, and never over stays it's welcome. A must see for all comic book fans, or fans of superheroes. If you have a kid who is a fan of any of the Marvel characters, then you should have them check this out.