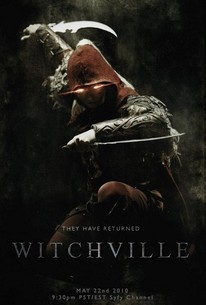 A brave prince returns to his kingdom following the death of his father, and discovers it has been overtaken by witches who are hiding in plain sight. A coven of witches has spread pestilence and disease throughout Draeganoth, claiming the life of King Malachy and the people of his kingdom. Upon returning to Draeganoth and discovering the truth about his father's demise, the noble Prince Malachy enlists the aid of his two best knights, and a fearless witch-hunter to banish the evil before it can grow even stronger. As Prince Malachy seeks to root out the witches from the thieves and killers who roam the land, a secret from the past emerges to challenge his perception of his mysterious ancestry. ~ Jason Buchanan, Rovi

Sarah Douglas
as The Red Queen

Lynne Verrall
as Baba
View All

There are no critic reviews yet for Witchville. Keep checking Rotten Tomatoes for updates!