The Witches of Eastwick1987 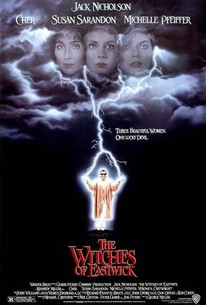 Critics Consensus: A wickedly funny tale of three witches and their duel with the Devil, fuelled by some delicious fantasy and arch comedic performances.

Critic Consensus: A wickedly funny tale of three witches and their duel with the Devil, fuelled by some delicious fantasy and arch comedic performances.

The Witches of Eastwick Photos

The Witches of Eastwick, a memorable comedy with a dark edge, is based upon a novel by John Updike. On Thursday nights three female friends -- Alex (Cher), Sukie (Michelle Pfeiffer), and Jane (Susan Sarandon) -- meet to chug martinis, learn Chinese aphrodisiac cooking and lament the scarcity of eligible men. As they sit around, they fantasize about and describe their idea of the ideal male. Arriving in town the following day is Satan, disguised as mysterious stranger Darrell Van Horn (Jack Nicholson). One by one, Van Horne seduces each of the women. Then, strange things begin to happen. When the town matriarch Felicia (Veronica Cartwright) publicly denounces Van Horne, she sustains a nasty compound fracture. When she forces her editor husband to publish a story about Van Horne's sexual antics, Darrell gets his revenge with revoltingly large amounts of cherries. The women now see that they may be in danger and begin to plot their escape. ~ Linda Rasmussen, Rovi

Jane A. Johnston
as Woman at Market

Harriet Medin
as Woman at Market

News & Interviews for The Witches of Eastwick

View All The Witches of Eastwick News

Critic Reviews for The Witches of Eastwick

There are some moments in The Witches of Eastwick that stretch uncomfortably for effects, and yet a lot of the time this movie plays like a plausible story about implausible people. The performances sell it.

This is a remarkably faithful rendition on film of a most diverting novel showing that, in the right hands, movies can achieve all the delights of literate entertainment.

Nothing is developed -- except the performers' egos.

The film itself is one of the most visually striking and well-crafted film of its kind.

Miller modulates the film from such a meticulous place that his fantasy develops with sincerity and humor, great underlying chemistry, and performances that inhabit the material rather than overplay it.

This quirky tale of power, love and loneliness can't help but entertain with its lush photography (by Vimos Zsigmond) and heavenly cast.

at the end of the day, it's just too obvious.

...at its best whenever Nicholson or Cartwright are on the screen.

Jack Nicholson is at his mischievous best in this wildly entertaining battle of the sexes.

Audience Reviews for The Witches of Eastwick

Way ahead of its time, this film is so naughty, non-pc and bold in its feminism and criticism of conservatism you're sometimes wondering if you heard correctly. Nicholson probably never had more fun being as devilish as possible, but he ultimately finds his master in three strong women. The cherry stone scene is outrageous and the showdown pretty damn crazy too. Highly amusing and has aged pretty decently! Made me fall in love with Michelle Pfeiffer all over again.

2018 rewatch. Has not aged too well. Still enjoyable

Three headstrong single women in idyllic Eastwick wish for their dream beaux, and a devilish new stranger comes to town to seduce them in turn. Cher, Sarandon, and Pfeiffer are brassy, sensual, and sweet, respectively, and Jack Nicholson is the epitome of the diabolical wag. Daryl van Horne spouts some base misogyny, which has the potential to be clever and satirical if only there were some wink at the audience. The trio of women gets their revenge through sorcery, but they still raise Daryl's lovechildren and treat him as merely an exasperating, absentee father rather than quashing his sacrilegious doctrine, defeating him for good, or at least spurning him for the Satan proxy he is. Upon learning that this movie was adapted from a novel by John Updike, a writer I admire, I expected the hijinx to lead to something deeper. Is Daryl a Satan proxy or a God proxy? Daryl rants about how he gave the girls everything, and then when they forsake him, he will seek retribution. Isn't that the depiction of a vengeful and wrathful God? Is the satire on how often godliness and wickedness coincide? Well, apparently the original novel was intended as a feminist manifesto (even though the women are represented as actual witches), but there isn't much in the way of theological commentary, so I don't know what to make of book or film.

The Witches of Eastwick is a highly entertaining comedy horror film that relies on a great cast of actors and well constructed script to make for a fun, exhilarating two hours. Jack Nicholson is great in his performance as the devil, and director George Miller who also directed the Mad Max trilogy. Although not a memorable film, The Witches of Eastwick is one of the better films dealing with witches. Compared to others that have tackled the subject, this film is much more entertaining. At times the film could have been better, and the script should have been polished a bit more, but overall the strong on-screen performances more than make up for its weak moments. Every actor here is great, and each brings something unique to the screen to make this a fun, entertaining ride. George Miller's direction is terrific, and it's an impressive transition from his previous work. This is a film that will most certainly delight fantasy and horror fans alike, as the film touches on both genres, and has some effective comedic bits throughout the film. This is a good film, that should have been great with its cast, but like I said, the weak aspects in the story just prevent this film from ever reaching its full potential. Nonetheless it's a film worth seeing despite its flaws. With its cast at hand and good direction, The Witches of Eastwick is a film that delivers a good two hours of entertainment, but some viewers may be wanting more out of this film. Enjoyable for what it sets out to do, and one of the better witch movies out there. This film is far better than The Craft or Hocus Pocus. The works well enough to reach above its flaws, and Jack Nicholson and the cast save the story from being a mess. Even with its weak moments, this film proves that George Miller is able to venture into different territory and make an amusing film.

The Witches of Eastwick Quotes