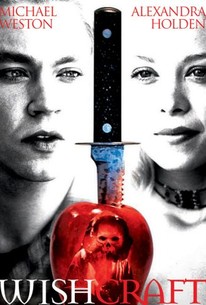 A school nerd is granted his heart's desire -- but at what price? -- in this teen horror flick. Brett (Michael Weston) is continually picked-upon and cast out of his school's various elite social circles, even as he worships popular-girl Samantha (Alexandra Holden) from afar. But after finding a strange package granting him three wishes, however, Brett finds the tide turning in his favor: suddenly, he and Samantha are dating, and he's the envy of every jock in the school. Not coincidentally, his scenester classmates start dying, one by one, and this -- combined with the fact that he won the favors of Samantha through mystical means -- begins to weigh heavily on Brett's mind as he plans a confrontation with the elusive killer.

There are no critic reviews yet for Wishcraft. Keep checking Rotten Tomatoes for updates!

There are no featured reviews for Wishcraft at this time.