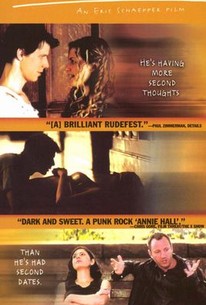 Eric Schaeffer writes, directs, produces, and stars in this wacky sex comedy. Nine days away from his wedding, Spindell (Schaeffer) realizes that, though his future bride Tabitha (Callie Thorne) is both gorgeous and understanding, he no longer finds her sexually attractive. In flashbacks, we learn about the sexually precocious Spindell, including a time as a toddler when he tries to have oral sex with an electrical outlet. Later in college, he has a long passionate affair with Samantha, who is just as neurotic and sexually kinked as he is. Wirey Spindell was screened at the 1999 Boston Film Festival.

Jennifer Wiltsie
as Wirey's Mom (as a youth)

Peggy Gormley
as Wirey's Mom (as an adult)

John C. Haynes
as Announcer No. 1

Jim Gaffigan
as Announcer No. 2

Jorge Pupo
as Scout No. 1

J. Michael Patterson
as Scout No. 2

Ray Fitzgerald
as Scout No. 3

Tara Kruse
as Sally
View All

Long, shapeless, and painfully unfunny, Wirey Spindell confirms its maker's status as one of the most distinctively awful filmmakers of his generation.

...a teen sex comedy for the grown-up arthouse crowd.

To say that this movie is true to life is only to say that it's banal, boring and confusing.

Wirey Spindell is as idiosyncratic as the name of its hero, which gives this surprisingly affecting film its title.

Ambiguously autobiographical (and, per usual, sooty-lensed.

Where writer-director Eric Schaeffer shoots himself in the foot is by succumbing to the narcissistic voice within.

The first pleasant surprise of 2000.

A naked attempt at Jerry Maguire-style profundity that elicited 47 temple rubs and 13 audible Jesuses between my companion and I... the comedic equivalent of flat soda.

The big puzzle is why anyone would want to get within 50 feet of the guy, let alone marry him.

As annoying and self-indulgent as the film may be, it can only seem irredeemable once Schaeffer has confirmed what you already suspected -- that he's using the film to trot out every oddball anecdote from his own life.

Easily the best film that writer-director Eric Schaeffer (My Life's in Turnaround, Fall, If Lucy Fell) has made in his short career as the king of narcissistic indie cinema. But that's like saying that some hate crimes are preferable to others.

Schaeffer needs to realize that there are few universals in his stories and way too many specifics, and it takes more than a weird name like Wirey Spindell to make a person really distinctive.

There are no featured audience reviews yet. Click the link below to see what others say about Wirey Spindell!