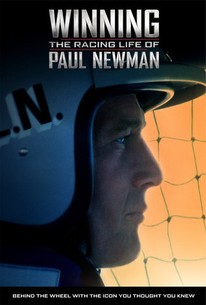 The world knows Paul Newman as an Academy Award winning actor with a fifty-plus year career as one of the most prolific and revered actors in American Cinema. He was also well known for his philanthropy Newman's Own has given more than four hundred and thirty million dollars to charities around the world. Yet few know the gasoline-fueled passion that became so important in this complex, multifaceted man's makeup. Newman's deep seeded passion for racing was so intense it nearly sidelined his acting career. His racing career spanned thirty-five years Newman won four national championships as a driver and eight championships as an owner. Not bad for a guy who didn't even start racing until he was forty-seven years old.

News & Interviews for Winning: The Racing Life Of Paul Newman

View All Winning: The Racing Life Of Paul Newman News

Critic Reviews for Winning: The Racing Life Of Paul Newman

For longtime fans of Paul Newman, "Winning" provides valuable insight into the sport he loved. For millennials that might be only vaguely familiar with this old-time movie star, it's a lesson in how one should live a life.

Hagiography? Maybe a little, but for fans of the actor, it's a must-see.

The portrait that emerges of Newman is of a decent, cool and low-key guy who preferred racing over acting. In his own words, "the only grace I ever found was in an automobile."

As passionate about its subject as the actor was about driving, Winning: The Racing Life of Paul Newman provides a fascinating footnote to his distinguished cinematic career.

I don't doubt Carolla's respect for the material -- he himself is a racer, and owns and drives several of Newman's cars. But he's stretching a few interesting anecdotes out to feature length, and you can feel the strain on the material.

A great surprise and a documentary that should get consideration from movie fans and racinf enthusiasts alike...after all, this film proves that those sects aren't all that different.

A documentary worth watching for racing fans, film buffs or anyone else looking for an engaging time at the movies.

[This] trim, 83-minute documentary will convince viewers that on the track, Newman was no dilettante.

A highly informative and loving tribute to the star's "secret" life, striving to indentify a thirst for competition and speed that drove him to seek pleasure on the race track.

Audience Reviews for Winning: The Racing Life Of Paul Newman

There are no featured audience reviews yet. Click the link below to see what others say about Winning: The Racing Life Of Paul Newman!