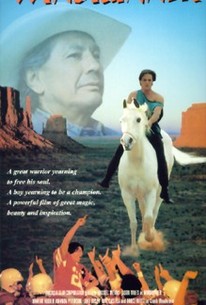 Margot Kidder and Russell Means star in this drama about a young man whose father is convicted of a serious crime and sent to prison. His family moves to be closer to where their father is incarcerated, but the teen quickly discovers that people look down on him because of his father's legal problems. Matters come to a head when the coach of his football team keeps him on the bench rather than letting him play, but soon the young man receives strength and guidance from an unusual source -- the spirit of Native American football legend Jim Thorpe.

There are no critic reviews yet for Windrunner. Keep checking Rotten Tomatoes for updates!

I definitely remember this, its an interesting movie.