Windows on the World2019 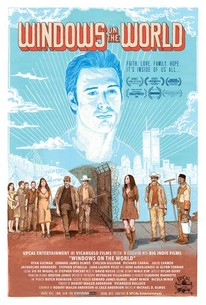 Windows on the World Photos

An immigrant's son takes an epic journey from Mexico to New York City as he searches for his father who was an undocumented worker in the World Trade Center, and has disappeared after 9/11. On the morning of September 11, 2001, Fernando and his family in Mexico watch the news in horror as the Twin Towers collapse. His father, Balthazar, is an undocumented busboy on the top floor in the Windows on the World restaurant. Three weeks pass, and there is no word from Balthazar. No telephone calls, money orders, or hope that he is alive. As the family grieves, feeling the emotional and financial toll of their absent patriarch, Fernando's distraught mother swears she sees her husband on news footage -- escaping from the building ALIVE! Heroic Fernando decides to take the epic journey from Mexico to New York City to find his father and save his family. Along the way, he finds love and befriends an eclectic group of international characters that help him restore his faith in humanity, as Fernando discovers the hard truths about his father, the melting pot of America, and the immigrant experience.

Critic Reviews for Windows on the World

"Windows on the World" lacks subtlety but finds emotional resonance in an immigrant's 9/11 related experience.

There are no featured reviews for Windows on the World at this time.

Windows on the World Quotes