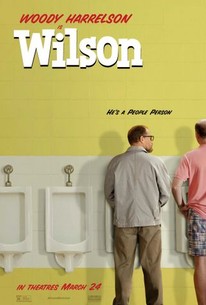 Woody Harrelson stars as Wilson, a lonely, neurotic and hilariously honest middle-aged misanthrope who reunites with his estranged wife (Laura Dern) and gets a shot at happiness when he learns he has a teenage daughter (Isabella Amara) he has never met. In his uniquely outrageous and slightly twisted way, he sets out to connect with her.

It struggles to fill the big screen, either emotionally or visually, and after a while Harrelson's say-it-as-it-is persona becomes irritating.

Director Craig Johnson (who also dealt with middle aged angst in his previous film, The Skeleton Twins) has a nicely matter of fact way of showing Wilson's tribulations.

The film's bouts of slapstick and sentiment sit slightly oddly with its downbeat tone, but Harrelson is consistently funny.

[Wilson has] many funny lines and a cast full of first-rate character actors such as Margo Martindale and Judy Greer.

A few good cameos from David Warshofsky, as a prickly old friend of Wilson's, and Margo Martindale, as a date gone wrong, grace the torpid landscape. But it should all be sharper and funnier than it is.

Great performances by Laura Dern and Woody Harrelson make it a heart-warming experience.

Wilson has been a long time coming yet sadly it's a disappointment.

There's a certain brand of strange to this story and film, but it's well done and oddly touching.

Director Craig Johnson and screenwriter Daniel Clowes get so caught up in the quirks of their lead character that they forget to build the film around the central character.

Much likes its eponymous character, Wilson isn't out to please everybody and is willing to push that just a little bit further and further in unexpected directions as it goes.

Wilson ends up being more enjoyable than you might have expected.

The film had its moments and certainly felt like an Alexander Payne film, just missing the core story strength. Woody is a fantastic actor and I thought this would be like Bad Santa was for Billy Bob, the story flips quickly and we miss some of the more interesting sections of the film, e.g. when Wilson is in prison. The film tries very hard but comes apart towards the finale, the opening 40 minutes was very funny and unfortunately couldn't maintain this throughout. I think the filmmakers attempted to make us like Wilson too much towards the end, felt forced and not fitting with the character. This might be adapted from a novel but that doesn't mean an ending in the book will suit a film medium. I quite liked this film and I suspect I will rewatch and review my initial 3 star verdict in the next few years. The film is very funny and could grow in viewership with streaming services, only time will tell. 15-06-2017.