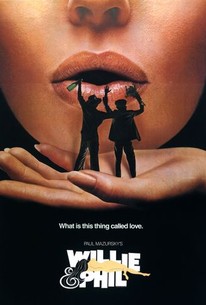 Director Paul Mazursky's follow-up to his 1978 hit An Unmarried Woman found this filmmaker creating a feature-length homage to the François Truffaut classic Jules and Jim. Willie and Phil begins with Jewish intellectual schoolteacher Willie (Michael Ontkean) meeting gregarious Italian-American fashion photographer Phil (Ray Sharkey) at a screening of Jules and Jim. The two hit it off immediately and soon find their circle of two expanding to three when they meet Jeanette (Margot Kidder), a free-spirited Southerner who has moved to New York City to figure out her life. Jeanette soon moves in Willie, but the three find themselves in a romantic triangle that constantly shifts over the next nine years as each of the three struggles to find their destiny while honoring the love they feel for each other. Mazursky would later remake another foreign classic (Boudu Saved From Drowning) into his hit Down and Out in Beverly Hills

Natalie Wood
as Herself

Tom Noonan
as Man In Park

I think Mazursky's suggesting something interesting about the 1970s. It was a decade without a consuming passion, without an overall subject or tone.

Paul Mazursky's story feels old. His allusions to the East and to American society are not funny but frivolous. [Full Review in Spanish]

Willie & Phil vividly shows the pain and unfulfilment that comes with the yearning for new experience that is so embedded in the American grain.

There are no featured audience reviews yet. Click the link below to see what others say about Willie & Phil!