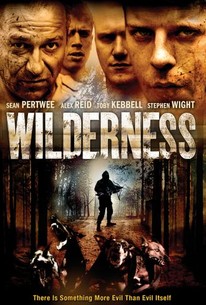 A group of juvenile delinquents are forced to fight for their lives after being sent the forest for an exercise in teamwork and tracked by a crossbow-wielding madman with a pack of flesh-eating dogs. The Young Offenders Institution is the kind of place kids are sent when all hope is lost. In order to test their mettle in an environment where every decision counts, the powers that be at the Young Offenders Institution send their worst offenders into deep into the woods for a tough-love lesson in character-building. Suddenly surrounded by dense forestation, deadly rapids, and a jagged coastline that makes escape virtually impossible, the young criminals must band together after their group leaders are ruthlessly slaughtered. With time running out and their numbers quickly dwindling, these tough-talking teens must put their survival skills to the ultimate test and band together to take down a merciless predator who relishes in watching his victims suffer.

This over-literal, fright-free slasher is strictly for completist gorehounds and Home Secretaries seeking radical solutions to the high number of youth offenders.

Wilderness has an extremely high gore factor and a couple of genuinely nasty scenes but it's ultimately let down by its unlikeable characters.

Nothing is nearly as scary or surprising as the filmmakers seem to think it is.

It's nasty and bloody with enough mayhem to make most horror fans overlook some even more horrific dialogue.

Bloody British horror about a group of young prison offenders being hunted down on a remote island by a vengeful father and his pack of German Shepherds. Enjoyble survival horror. Fairly straightforward though, nothing too surprising or groundbreaking. If you liked other Brit horrors like Dog Soldiers, The Decent or Severence than this is worth a look.

A welcome entry to survival horror with shades of the slasher genre thrown in for good measure. Low budget British fun.

Low budget UK horror, looked great from trailer but bit of a let down overall, had great potential. Very gory.