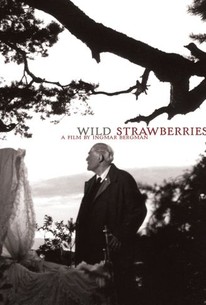 Critics Consensus: Wild Strawberries were never so bittersweet as Ingmar Bergman's beautifully written and filmed look at one man's nostalgic journey into the past.

Critics Consensus: Wild Strawberries were never so bittersweet as Ingmar Bergman's beautifully written and filmed look at one man's nostalgic journey into the past.

Critic Consensus: Wild Strawberries were never so bittersweet as Ingmar Bergman's beautifully written and filmed look at one man's nostalgic journey into the past.

Possibly Ingmar Bergman's greatest film, this profound character study chronicles an automobile trip taken by an elderly medical professor to accept an honorary degree. Incidents and conversations occurring during the journey are intermixed with dreams and memories as the old man comes to terms with the life he has lived.

Julian Kindahl
as Agda, the housekeeper

Åke Fridell
as Her Lover

Per Sjöstrand
as Sigfrid

Wulff Lund
as (uncredited)
View All

Michael Apted’s Five Favorite Films
Many More Mummy Movies May Be Made
Through Bergman’s Past, Brightly

It's a personal and profound work.

An archetypal Ingmar Bergman film, and one of his best.

One of Bergman's warmest, and therefore finest films.

Mr. Bergman, being a poet with the camera, gets some grand, open, sensitive images, but he has not conveyed full clarity in this film.

Victor Sjostrom's magnificent performance carries an emotional authority that gives Bergman's great movie a warmth and an accessibility that it might not otherwise have had.

This is one of the truly outstanding works of post-war European cinema.

Wild Strawberries is to my mind a far more complete and interesting film than the much over- praised Seventh Seal, for the simple reason that it says something negative.

Bergman understands one of the most bittersweet characteristics of nostalgia: it juxtaposes our memories, in which everyone is young and healthy, and the inevitable reality of physical decline that followed. [Full review in Portuguese.]

[VIDEO ESSAY] "Wild Strawberries" is a thematically abundant film that fluidly condenses a lifetime's worth of experience into succinct cinematic fragments under Ingmar Bergman's complex construction of abstract corollaries.

...an intensely cinematic psychological portrait of a man reckoning with the how and why of who he's become.

much less involved than many of bergman's other films, but profound in its simplicity. i was less impressed with the camera work than usual for his films, but the story lends itself well to introspection. charming.

"You know so much, and you don't know anything." Master of all things meaningful, oeuvre-crafter Ingmar Bergman is no stranger to philosophy. Where the common director goes for the risklessly safe, Bergman takes the audacious route in a prototype vehicle. Every undertaking a challenge. Every tale a crack at the Herculean questions of life and death. "Who am I and why have I become this way?" are the ones at the heart of Wild Strawberries, a character study of infinite appliance, about an old medical professor named Dr. Isak Borg, who at the winter of his existence reminisce on the choices and events that would eventually arrive at his socially distanced self. Lonely, in part by selection. Cynical and cranky, as the result of incidents made fog-like by the opacity of years gone by. But then it comes to him in a dream: angst-filled, strikingly symbolic imagery, involving a handless clock (as if to say his time is up) a coffin, flying open, revealing his still alive double expressing spiritual unrest (a self-explanatory metaphor) and last, but certainly least on the bizarreness barometer, a man with a face that - in lack of a better description - only a mother could love. To that last bit I say: [insert interpretation here]. But it is disturbing, let me tell you. Catalytic in effect, the dream sequence also has the function of a pivotal epiphany. A knock on the door from the bony knuckles of the Grim Reaper (and perhaps a game of chess later on) which in reality manifests itself as an altered course of action. Instead of, as he had originally planned, taking a plane from his home in Stockholm to Lund where he is expected to receive an honorary degree, Dr. Borg decides to go by car instead, making a few stops along the way in what becomes an external journey as much as a spiritual one. Following along is Marianne, his daughter-in-law played by the drop-dead gorgeous Ingrid Thulin. An actress of such contemporary beauty that you'd never guess it was shot in 1957. We also meet Sara, a sassy young woman (in a vibrant turn by Bibi Andersson) and her entourage consisting of two men at different positions regarding the existence of God. There are some fantastic scenes involving these two; starting off as intellectual debate and later escalating to some more testosterone-filled pushing and shoving. After which Sara hilariously responds: "Well, is there a God?" There's a lot of humorous touches like that baked into the strawberry pie, which makes it all the tastier. Sweet as that may be though, the main ingredient is more like lemon; sour at Dr. Isak's musings, about love lost and desires unfulfilled. A character who we get to know inside and out, as memories from his past suddenly becomes clear as day; accounting for his glass-is-half-empty persona, as well as the anima in which we discover a man full of warmth and love. In theme and sentiment, it reminded me a great deal of Charles Dickens' A Christmas Carol and works beautifully as a companion piece to The Seventh Seal. The soul-searching, the existential reflections - it not only mirrors Bergman's own inner struggles at the time (referred to as his "middle period") but also serves as an insightful clue to the subversive, independent thought patterns that shaped the modern Swedish mindset and made it what it is today. If I'm going to fault the film for anything, it's that shifts in dialogue between poetic and folksy aren't always in concert. For the most part, the screenplay nails it, so it's by no means a major issue, but enough to place it half a star away from a perfect score. Apart from that, however, a deeply mesmerizing meditation on life, death, faith and regret. Riveting performance by Victor Sjöström as Dr. Borg and a magnificent film altogether, which became even more captivating by the fact that I have traveled on some of the same roads as they do in the film (both scenery-wise and spiritually I should say). Yet, to put it all in words, as I have attempted here, is rather futile when it comes to Bergman. There's not a film by him that I have seen so far that haven't submerged me in a flood of ethereal contemplation. Timeless and spellbinding, it's a maelstrom, however, that I'm more than happy to swirl about in. http://www.facebook.com/pages/Mikes-Movie-Reviews/281824101875153?ref=hl

An aging professor has dreams and flashbacks to his youth as he drives to a university to accept an honorary degree. An elegiac reflection on an ordinary life; many people respond empathetically to this one, while it leaves many others (like me) a bit cold.