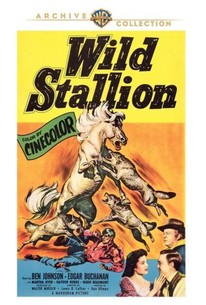 Though Ben Johnson would have to wait until the 1970s before full stardom was bestowed upon him, 1952's Wild Stallion proved that, even at this early stage, Johnson had what it took to carry a picture. Harking back to his pre-movie rodeo days, Johnson plays inveterate horse-lover Dan Light, who spends a lifetime searching for his pet colt, who'd managed to escape when Light's parents were killed by Indians. The colt has grown to a magnificent wild stallion, much coveted by others, including the U.S. Cavalry. The color photography by Harry Neumann is superb, as are the supporting performances by Martha Hyer, Edgar Buchanan and Don Haggerty. The Wild Stallion was produced by Walter Mirisch, who later graduated to such big-budget westerns as Man of the West (1958) and The Magnificent Seven (1960). ~ Hal Erickson, Rovi

Susan Odin
as Caroline as a Child

I. Stanford Jolley
as Bill Cole

There are no critic reviews yet for Wild Stallion. Keep checking Rotten Tomatoes for updates!

There are no featured reviews for Wild Stallion at this time.