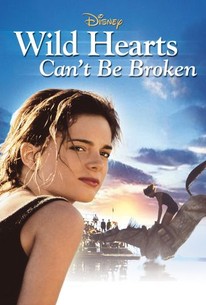 Based on a true story, Disney's family film Wild Hearts Can't Be Broken follows the adventures of a 1920s teenager named Sonora Webster (Gabrielle Anwar), who runs away from her foster home to join a carnival. At the carnival, she gets a job as a stunt rider who leaps with her horse into a tank of water 40 feet below. Along the way, she has plenty of adventures, eventually falling in love with the son of one of the show's cowboys.

Jason Patric Proves Himself a "Walker"

The movie has undeniable charms, and yet I found myself unpersuaded, perhaps because I resist having my emotions manipulated with cinematic chiropractic.

t's cheesy but I love Gabrielle Anwar and Michael Schoeffling.

Love it- I love true stories of overcoming obstacles.

Gabrielle Anwar was 21 years old when she played Sonora. I thought she was maybe 14, no more than 16 except when she got her hair done and put on make-up I thought, "DANG! She looks 21." But then when the love scenes played out I became increasingly disgusted because she kept kissing a guy who looked like he was 30. Indeed, Michael Schoeffling was 31 in this movie. The huge age difference was very distracting to the story line. I couldn't tell if she was supposed to have grown older from the school days or if the love story was happening over a longer period. Other than that, this film was inspiring and fun to watch, even if Sonora was a bit of a spoiled brat. I still liked her for her fire and spirit. She was also very beautiful!

This movie is okay. I guess I like it when she goes blind, and when cliff roberton tells her she needs bigger boobs.