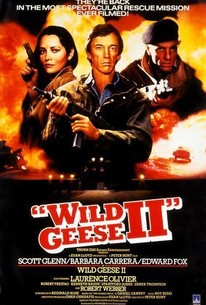 Laurence Olivier trots out his late-career German accent once again, playing Rudolf Hess in this sequel to Wild Geese. Richard Burton was set to star in the film, but when he died, Edward Fox was brought in as a replacement, playing Burton's younger brother. (the film is dedicated to Burton). The story concerns John Haddad (Scott Glenn), who is hired by a television company to engineer the kidnapping of Rudolf Hess from Spandau prison. Helping him with his assignment are the brother and sister team of Kathy (Barbara Carrera) and Michael Lukas (John Terry). The mercenaries hopes to force Hess to divulge hidden Nazis secrets left unrevealed since World War II.

Ingrid Pitt
as The Hooker

There are no critic reviews yet for Wild Geese 2. Keep checking Rotten Tomatoes for updates!

There are no featured reviews for Wild Geese 2 at this time.