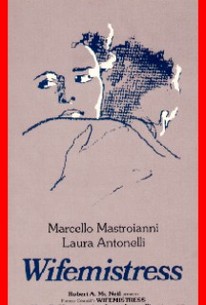 A comeback film of sorts for director Marco Vicario, Mogliamante stars Laura Antonelli as the wife of political activist Marcello Mastrioanni. When her husband has to go into hiding from the authorities, Laura consoles herself by going through his private papers. Curiously, discovering the length and breadth of Mastrioanni's activities-including his extramarital affairs--sparks a sexual reawakening in his wife. More curious is the personality change undergone by Laura: formerly meek and subservient, she literally "becomes" her firebrand husband in his absence. As for Mastrioanni, once his role in life has been usurped, he is reduced to little more than a sidelines observer. This diverting domestic drama was also issued under the titles Wifemistress and Lover, Wife.

The film's shimmering eroticism is delicious.

All this prurient dissembling has a way of getting on one's nerves, as do the movie's numbingly repetitive string score and its stubborn refusal to come to a prompt conclusion.

It's sprinkling on the parmesan to disguise the fact that what you're eating is basically bland fare, a simple mix of flour and water.

There are no featured reviews for Wifemistress at this time.