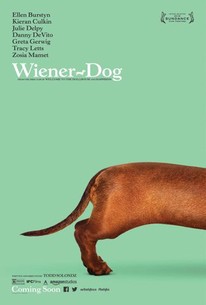 Critics Consensus: For filmgoers predisposed to enjoy Todd Solondz' brand of black comedy, Wiener-Dog won't disappoint -- but those put off by previous works need not apply.

Critics Consensus: For filmgoers predisposed to enjoy Todd Solondz' brand of black comedy, Wiener-Dog won't disappoint -- but those put off by previous works need not apply.

Critic Consensus: For filmgoers predisposed to enjoy Todd Solondz' brand of black comedy, Wiener-Dog won't disappoint -- but those put off by previous works need not apply.

A dachshund is taken in by a veterinary technician named Dawn Wiener (Greta Gerwig), who soon sets off on a road trip. The lovable dog also encounters a young boy, a film professor, and a troubled grandmother and granddaughter. The character of Dawn Wiener first appeared in the 1995 coming-of-age film Welcome to the Dollhouse, which was also written and directed by Todd Solondz. Wiener-Dog made its world premiere at the 2016 Sundance Film Festival.

Sharon Washington
as Phillips
View All

On DVD This Week: The Huntsman: Winter’s War, Roots, The Nice Guys, and More
Independence Day: Resurgence Is More of the Same

Solondz loves revisiting his creations (he did it in Life During Wartime and, glancingly, Palindromes). Alas, he never improves on the originals.

Wiener-Dog is a mordantly funny tour of the human condition seen from the low-slung position of a sausage dog.

It is a movie with a hard core of disillusionment.

The film is more successful as an exercise in style than it is as a gripping observation of the real world.

While every story is razor-sharp, the Danny DeVito segment is particularly poignant in its depiction of film schools' toxic environment...

At the end of the day, Solondz puts all the charm and sweetness of the Wiener-Dog on this Daschund, but it is too much of a burden to fill up the 90 minute running time.

Uncomfortable but endearing. Solondz does his best at trying to be 'normal'. [Full review in Spanish].

Todd Solondz Once Again Shows His Panache for The Hilariously Morbid With Wiener-Dog.

Wiener-Dog aims for wry, dry, and dark, but is instead outrageously patronising and horrible.

Blackly funny at times, it looks terrific - but basically goes to show that life's a b---h. And then you die.

The idea of following a little dog through his life and the ever-changing oddball owners may still be interesting enough and the first few chapters mostly work. After a pretty random intermission (and the first unexplained change of owners) things get more and more joyless and boring up until the tasteless and insulting ending, which makes you feel as if you've been wasting your time. Artsy fartsy and ultimately pointless.

I liked it, but that ending was terrible.

Solondz is extremely arrogant to think that only he knows what "real art" is, proving only the opposite with this mediocre film that is artificial as a bad theater play and so tonally awful that it feels way too bleak for a comedy, no matter how dark it is supposed to be.

The pup in Wiener-Dog features heavily in each episode. Yet despite the title, this is really about people, not the canine. The beloved pet is merely a construct that gives us an excuse to follow an assortment of characters. There's a world weary tone to these sagas, but there's also the soul of humanity as well. For example the relationship between Remi and the dachshund is pure and sweet. They share a friendship to which his parents are immune. We sympathize with the various heroes in their respective vignettes, even though they may have serious flaws. There's an authenticity to that. I mean we are flawed too, right? As the film marches to its inevitable conclusion, we brace ourselves. Todd Solondz has contempt for the Hollywood happy ending. Wiener-Dog is typified by a grisly finale that hits you like a slap in the face. Then the camera lingers on the event. There's a palpable rage against society here. The experience may sting, but the script still makes a sincere plea for mankind. I saw hope amidst the despair. That's kind of powerful. fastfilmreviews.com